Technologies that change the world often arise from the work of people whose passion and imagination were ignited by the wonder of something entirely new to human experience. Radio is one example. Before there were radio engineers, scientists were the professionals paid to spend their time studying and experimenting with radio. People who spent their own time and money to do the same thing were by definition amateurs, but were no less passionate, no less imaginative than their professional peers. Often the two—scientist and amateur—were, and still are, one and the same person.

They began with discovery, building upon hundreds of years spent trying to understand the nature of electricity and magnetism. The nineteenth century experiments and theories of Michael Faraday and James Clerk Maxwell established mathematical descriptions of how electromagnetic induction, and more importantly, radiation, occurred. Heinrich Hertz demonstrated it practically in 1886 showing how a spark in his “resonator” circuit, the basis for transmitters to come later, could be made to induce a secondary spark in another circuit (the receiver) located some distance away in his laboratory.1 His publication in 1887 kicked off a surge of new research and invention as scientists exploring the nature of electricity and magnetic induction shifted their attention to electromagnetic radiation.

But it was Guglielmo Marconi who, at age twenty-two, first brought together the individual inventions of several others to produce a practical communications system in 1896. That year, using a Hertz oscillator as a transmitter, a tube filled with metal filings called a coherer as a receiver, and aerials on both, he demonstrated his system by sending a message wirelessly over two miles of English countryside, and immediately applied for a patent. As described by DeSoto, he thus became the father of radio though not its singular inventor.2

At this early stage, wireless consisted of generating high (radio) frequency noise over here, causing an electromagnetic disturbance to be sent out in all directions, and then transforming that disturbance into audio noise over there at some distant location. Turn the noise on and off and you could send messages from here to there by wireless telegraphy. Some variation on the Hertz oscillator was typically used as a transmitter to produce a broad, noisy signal. Receivers were constructed using any of several materials that were capable of natural rectification or in some other way could make the signal audible to the human ear. Since such a receiver had no power supply of its own, a listener would hear sounds produced directly and entirely by the energy of the incoming signal. The concept and apparatus were so simple that electrical hobbyists were attracted to experiment, too—the first radio amateurs.

In England, as the Victorian era came to a close, the wireless era was just beginning. Marconi extended his two miles to four over land, ten miles between ships, and then thirty-two across the English Channel. The biggest splash of all came on 12 December 1901. Using an antenna wire supported 400 feet up in the air by a kite flying over Signal Hill in Newfoundland, Marconi heard the Morse code letter ‘S’ transmitted by his station in Poldhu, Cornwall in southwest England. Spanning the Channel was one thing—the Atlantic Ocean was entirely another. The public noticed. His accomplishment dominated the press and the world’s attention that year. Wireless was no longer considered simply a curiosity pursued by hobbyists and a few scientists. And most significantly, after years of slow progress, both professional and amateur electrical experimenters turned to wireless communication as their primary pursuit and accelerated the pace of discovery.

During the first five years of the new century, 115 articles were published about wireless in a wide variety of non-technical journals,3 feeding the rising public appetite. A flurry of inventions followed, including voice transmission by Reginald Fessenden, the two-electrode vacuum tube diode by John Ambrose Fleming and the Audion three-electrode vacuum tube by Lee DeForest. The term radio was first adopted by the International Wireless Telegraph Convention in late 1906, though its general use would come much later.4

Perhaps the most obvious first application of the new technology was communicating with ships at sea, where wires could never reach. Although a few individuals in the US Navy took an early interest beginning in the 1890s, the service at first refused to embrace radio, judging it too radical.5 Some senior officers even considered it an affront to their autonomy on the high seas, rejecting the very notion of receiving orders from land via wireless. But Marconi’s experiments in England led to the adoption of radio aboard Royal Navy ships. After similar successful US trials in 1899 during the Americas Cup Races, the Navy established a wireless telegraph board tasked with advising the service about the use of radio. The board recommended it be given a full trial, and in 1901 they further recommended abolishing the Navy’s “winged messenger” program, which used long distance carrier pigeons,6 in favor of radio. The Navy evaluated the competing systems available at the time and eventually chose to deploy equipment from DeForest and his US-based company, influenced by worries of supply problems should war break out in Europe.7

In addition to message communications for ships, the Navy saw the utility of using radio for broadcasting the time and weather conditions, both critical in navigation. The first regularly scheduled time broadcasts began in September 1904 from a station at the Boston Navy Yard. With no automatic, direct link between the landline feed from the Naval Observatory in Washington and the transmitter in Massachusetts, an operator had to manually keep pace with his key as he listened to the clicks from the observatory on the telephone.8 They later devised an automatic arrangement out of concern for accuracy, if not operator fatigue. 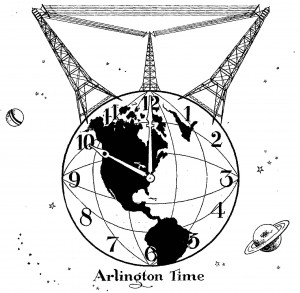 In 1913, NAA, the Navy’s powerful 100-kilowatt coastal station at Arlington, Virginia, became one of the most widely monitored information broadcasters. Known to amateurs simply as “Arlington,” they often used it as a reference—something to listen for to test their equipment—as well as a source of time and weather information. The first issue of QST carried an article called “Arlington Notes,” containing a summary of the format NAA used to broadcast weather conditions to ships along the Atlantic coast and on the Great Lakes.9

In an era when “local time” truly meant local, Arlington introduced an ability to synchronize time across a wide region, and to areas not touched by telegraph lines.