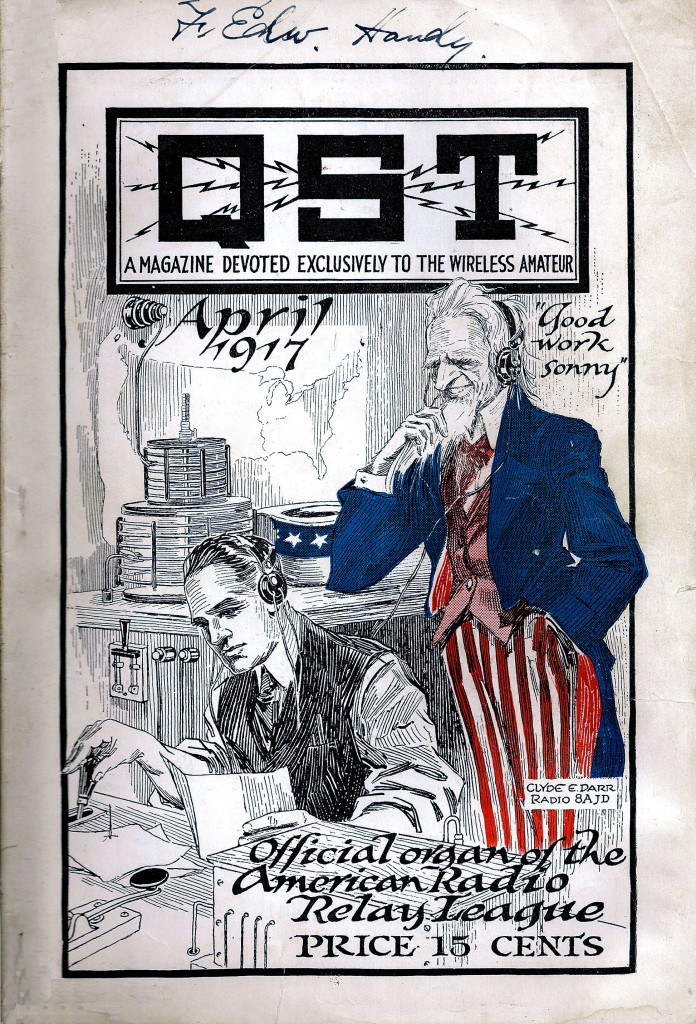 As it seemed ever more likely that the US might enter the war in Europe, radio amateurs speculated about their own role. Referring to it as “the disturbance,” a late-1916 QST editorial noted that the president had activated the National Guard and that Signal Corps units had been particularly prominent in the call-up.1 One Connecticut amateur, David Moore, 1ZZ, a member of his state’s unit and one of the original governors of the ARRL, related his experience: “The attitude of the Government, particularly the Army, is that we amateurs are all right as far as we go, but the trouble is we are all located in the big cities where the machinery of civilization is fully developed and at hand. The telephone and the telegraph are at hand, and only in extraordinary emergencies could they see where we could be of use.” This is surprisingly similar to views you hear today about the utility of amateur radio in the age of satellites, cell phones and the Internet. He went on to say that if hams were able to situate stations in remote areas with no infrastructure, they’d be exactly what the government needed—a foreshadowing of Field Day and many emergency operations to come. The editor continued to describe portable sets, and called upon amateurs to fill the extraordinary need for operators in the signal corps.

At a “Junior encampment”2 in Plattsburg, New York, which later became the Army’s Officer Candidate School, 3,500 servicemen from across the country were assembled that fall, including a number of radio amateurs.3 One of them, L. S. Somers, Jr., 3AFE, was relaxing along a roadside, enjoying a rest period during a long training march. He absent-mindedly blew a CQ using a blade of grass between his thumbs and was immediately answered by five other members of the H Company, Fourteenth Regiment who were within earshot. They formed a group that same day and would frequently get together to discuss radio.

The Army did not quite yet grasp the potential of the amateurs already embedded within its ranks, but soon would.

In February 1917, as the United States officially broke off diplomatic relations with Germany, QST opened a “Department4 of Defence” conducted by Edgar Felix, for discussing national security and defense-related activities for radio amateurs. Relaying naturally took center stage. A national relay system could be set up with volunteers assigned to 15-minute blocks of time twice per month when they would commit to be on the air to handle messages in time of war. Its effectiveness would depend primarily on the discipline of members in meeting their assigned on-air schedules.

The idea was compared with how the French had recently used boy scouts to carry messages and help their nation in other ways after it mobilized. It was also compared to other events from history: the runners of ancient Greece, Paul Revere’s ride, and the cannonaide, as it was called, used to announce the completion of the Erie Canal in 1825. By firing a succession of cannon along the canal’s length and down the Hudson River, the news of its opening was carried from Buffalo to New York in about ninety minutes—an audio-frequency relay.5

Message relaying had always been all about spanning greater distances and the challenge of “the game.” But now the ARRL intended to demonstrate to the government that the relay system could also be used for public good in times of crisis. QST went so far as to assert, incorrectly it turned out, that the outcome of trunk line tests would determine whether or not the League would be shut down in time of war. The final March editorial posed the big question on everyone’s mind: If the country went to war, would amateurs be permitted to continue operating?6

The answer quickly became clear. The April editorial declared it a near certainty that if war came, amateurs would be off the air for transmitting and probably receiving too.7 Nevertheless, the League held out hope that certain stations that were deemed useful would be called upon to continue operating. But that would depend on the availability of operators and stations, their willingness to keep constant operations going (multi-operator at one station), and in any case would probably only be allowed to receive. For the rest of the amateurs, QST recommended making good use of the idle time by studying the radio art. ARRL and QST would not be closed up; the magazine could serve as the main vehicle for amateurs to keep in touch. This turned out to be wishful thinking.

Despite the threatened shutdown, the ARRL was poised for expansion—such was the momentum in amateur radio at the war’s onset. By the three-year anniversary of its founding, the League had grown beyond the capacity of a few people, mostly just Maxim and Tuska, to keep things running. On 28 February, six members of the League’s leadership from Connecticut and New York met at The Engineers Club in New York City to work on restructuring the organization for the expected growth. Some had never before met in person. “After getting used to looking at, instead of listening to, each other…,” they drew up a constitution, elected an initial set of directors and six division managers to supersede the trunk line Managers.8  For several of them this was simply a change of title. They, in turn, would appoint district superintendents who would appoint assistants. The entire group, many in their twenties, would then comprise the “Operating Department” of the ARRL. With General Manager A. A. Hebert, 2ZH, in charge of League affairs, headquarters would be in New York City, with a mailing address at 50 Church Street, his business address.9 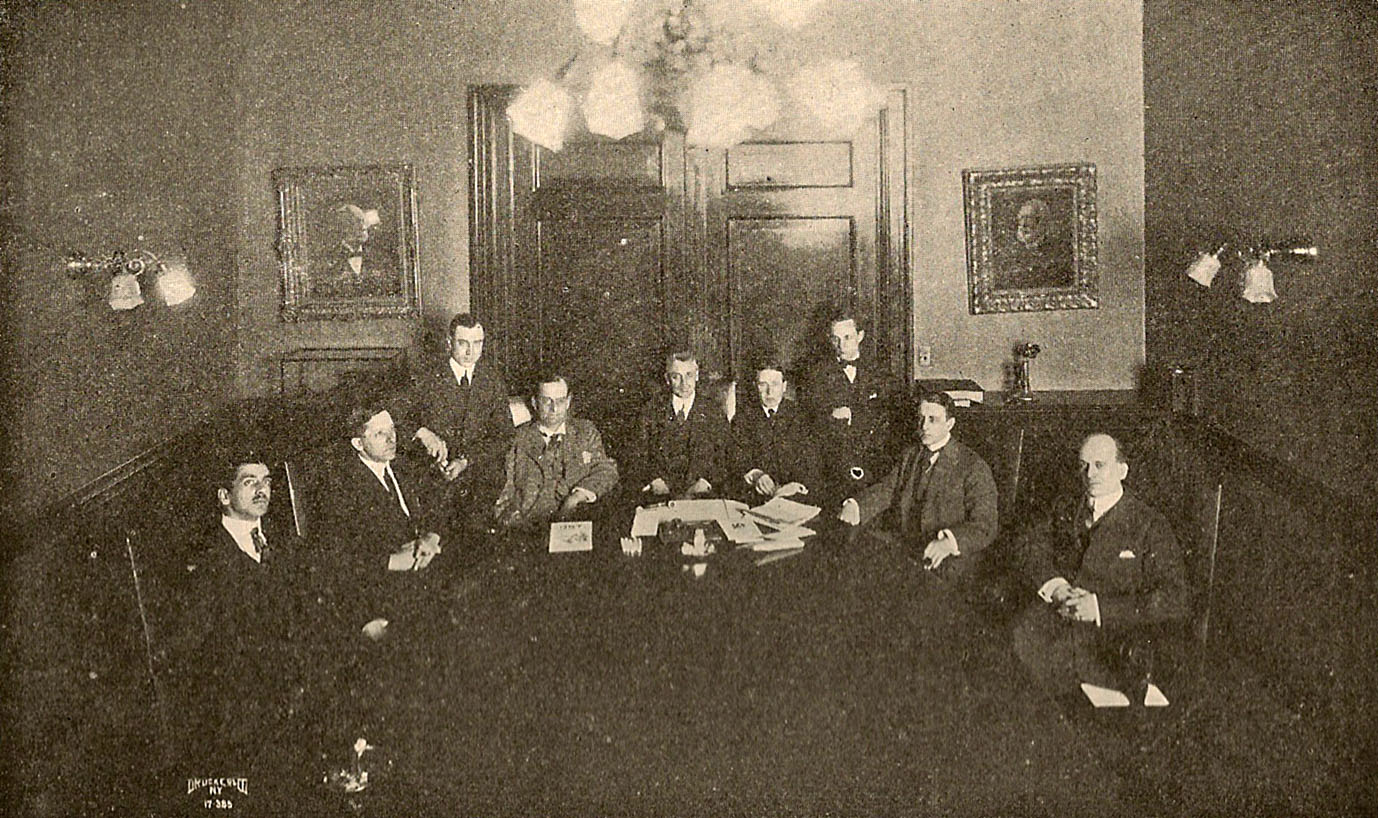 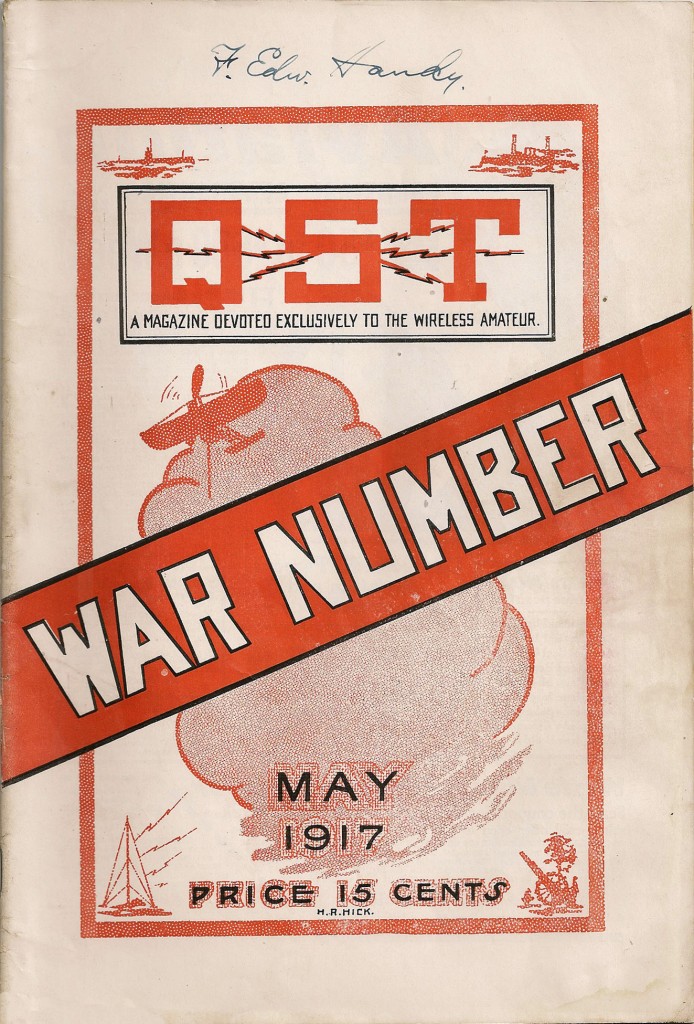 A picture of the Board of Direction meeting appeared in May QST along with the new constitution in its entirety and a map of the divisions. The constitution stated that the organization’s objective (I:2) “shall be the promotion of interest in radio communication, in such subjects as are allied thereto, and in the relaying of messages without charge.” Membership (II:1) would be open to “Anyone interested or engaged in radio telegraphy or telephony…”10  Together, the president, vice president, general manager, secretary, treasurer, and division directors constituted the Board of Direction, which would be the League’s primary governing body, with the president as its chairman. Amendments to the constitution could be adopted by a two-thirds vote of the board, except for changing the headquarters location, which would require a four-fifths vote. A life membership was offered for $25; regular dues were $2.

Normally, such a major restructuring would have received top billing in QST. But on the May issue’s cover a red banner declared it to be the “WAR NUMBER.” A full page announcement opposite the table of contents began, “War Measure!” and, “WE ARE AT WAR. AMATEUR WIRELESS IS AT A STANDSTILL. OUR STATIONS ARE CLOSED.” Although the circulation was continuing to increase, the number of pages would be decreased to make up for the loss of advertising revenue.

An order from the Department of Commerce, Navigation Service, Office of Radio Inspector, addressed to “all Radio Experimenters” was mailed to all licensed amateurs, and reprinted in QST. It ordered the immediate cessation of all operation, both transmitting and receiving as feared, but went even further to require the disabling of all equipment, and lowering and disconnection of all antennas. An enclosed “blank,” to be used to indicate compliance, was demanded from radio amateurs under threat of “rigid investigation.” The order was signed by the District Communications Superintendant, an unidentified Navy Lieutenant.  The QST editor lamented,

Every amateur station is closed down. The lid is on and clamped tightly for a period of time, the duration of which no man knows. All amateur traffic is halted where it happened to stand. All plans for improvements are cancelled. All the plans of our manufacturers are in mid-air. In short, the great amateur wireless advance in these United States is stopped.11

At the same time, however, the military had an acute and immediate need for radio operators and no time to train new ones. There was no question about what the estimated 6,000 amateurs should be doing after being put off the air. Nearly 4,000 eventually served, contributing to the Navy’s staff of radiomen which grew from just under 1,000 to nearly 7,000 by the war’s end.12

The ARRL Board of Direction responded by passing a resolution to offer the full support of the organization and its more than 3,000 members to the US Government. It would provide operators and equipment and, holding out hope for some way to operate, was prepared to “…undertake the organization and direction of a systematic plan to eliminate the operation of secret illegal wireless plants, which will be used to supply the enemy with traitorous information…”

The lead editorial that month was a call for enlistment into Navy and Army radio operations. For weeks the Navy had been appealing for radio operators to enlist or join the reserve.13 Maxim and General Manager Hebert were asked by the authorities to help recruit amateurs to man and equip coastal “patrol stations” as receiver operators; this editorial was the result.14 Amateurs could enroll in this service, working six hours per day for the duration of what was now being referred to as “the German war.” They would get a $60 uniform allowance, at least $30 pay per month depending on ability, and $1.50 for “subsistence” until quarters could be provided.15

The anticipated demand for radio equipment was so great that the Navy asked the League whether its members would provide it with equipment for fair value. The matter would be left up to the individual members.

Accordingly, the war was expected to quickly prompt a significant expansion of radio-related manufacturing. With many amateurs selling their gear to the military, there would also be a huge demand later and amateurs anticipated a tremendous improvement in their stations when the war eventually ended—perhaps a silver lining to the pervasive storm clouds of spring 1917.16

As summer, the perennial period of increasing static and decreasing on-air activity (even without the ban), approached the editor noted that the volume of message traffic had nevertheless grown tremendously and had been extending later into the season. In fact, before the shutdown this was the first time that March had ever been the heaviest traffic month.

He then turned philosophical:

Every once in a while one of you fellows writes in a letter and tells about the feeling of intimate acquaintance and friendship which he feels toward everybody concerned in the A. R. R. L. It always warms the cockles of our heart and inspires us. Just why we wireless bugs seem to possess this brotherly feeling to a greater extent than other groups of people, is not entirely plain. Some times we think it is because of the deeper and more abstruse problems which we have to face. We who are closely identified in the study of radio communication are brought very close to the wonders of Nature. The great laws which govern all things and which we must always observe, gives one a very much deeper regard for truth than comes to those who follow only the ordinary matters of life. The fact that we are all troubled with the same things, arouses a feeling of brotherhood. The fact that we appreciate one another’s failures and successes brings us close together. The romance of sitting alone in a little out of the way room among a lot of instruments, and yet be in communication with congenial spirits in other distant and out of the way little rooms, is conducive to profound and reverent thoughts. The fun which bubbles over from so many of us, and finds expression in QST, is one of the interesting manifestations of the effect of our work upon us.17

He expressed a hope that amateurs would be returning soon, and that this same feeling would remain even when the number of hams grew ten-fold in the future.