Clearly, Maxim’s main goal was to establish reliable relaying across the entire country. He was excited by its collaborative nature. In the third and last free issue of QST he wrote, “The co-operation of a few unknown but nevertheless kindred spirits between Portland, Maine and Portland, Oregon, by means of which the message is handed on, adds a touch to the whole scheme and makes it almost Utopian.”1 It was the primary reason for organizing the League, whose membership had just reached 1,000 in late 1915. But a great idea alone did not lead to a practical system.

The first of the blueprint items, and the only one pertaining to operating procedure, advised stations across the country to routinely announce themselves QRU (i.e., ready to receive messages) and maintain a regular schedule.

Maxim next added the concept of running regular tests. Aside from exercising the system and its parts, he hoped the tests would serve to bring timid operators out of their shells and get them to announce themselves. He believed there was a pervasive case of key fright among the members, similar to what we more recently recognize as a Novice’s first-contact fear. But Maxim observed this condition even among some experienced operators. He considered it a serious obstacle to establishing a reliable system, writing,

… there are a great many amateurs who lack the nerve or whatever else it is to break in and send out a general QRU?. There is something akin to standing up before the crowd and making a speech, in sending a general call. Some people would rather take a thrashing than touch their key for the purpose. They feel that they cannot send well enough, or that they will become rattled or that something will happen in the form of a come back, which will disclose the awful fact that they cannot receive well. These people never entirely get over this feeling and many of them have station equipment which in the hands of an operator with more nerve, could do wonders. For this reason, any plan which calls for initiative on the part of all stations in a voluntary organization such as the Relay League, is bound to be only partially effective.

He further proposed establishing a network of trunk lines across the country linking major cities, which would serve to channel messages across the country over paths known to be reliable. In the eastern part of the country a trunk line ran south along the New England coast (Trunk Line C) branching first at Boston out to Chicago (A) and again at Philadelphia out to New Orleans (D) before continuing on to the Carolinas and Florida. In the western states, three lines beginning in Chicago (A), St. Louis (B) and Houston (E) extended west out to Seattle, San Francisco and Los Angeles, then were linked together along the west coast trunk line (F). Stations lying along these lines would collaborate in organizing themselves locally, with the best stations – Maxim dubbed them Star Stations—emerging over time through constant testing and reporting of results to ARRL headquarters via mail. District headquarters would be established for each trunk line and would each be responsible for developing their own piece of the system. The League would thus be a national federation of local organizations—the beginnings of the nested, hierarchical structure that eventually became the National Traffic System. 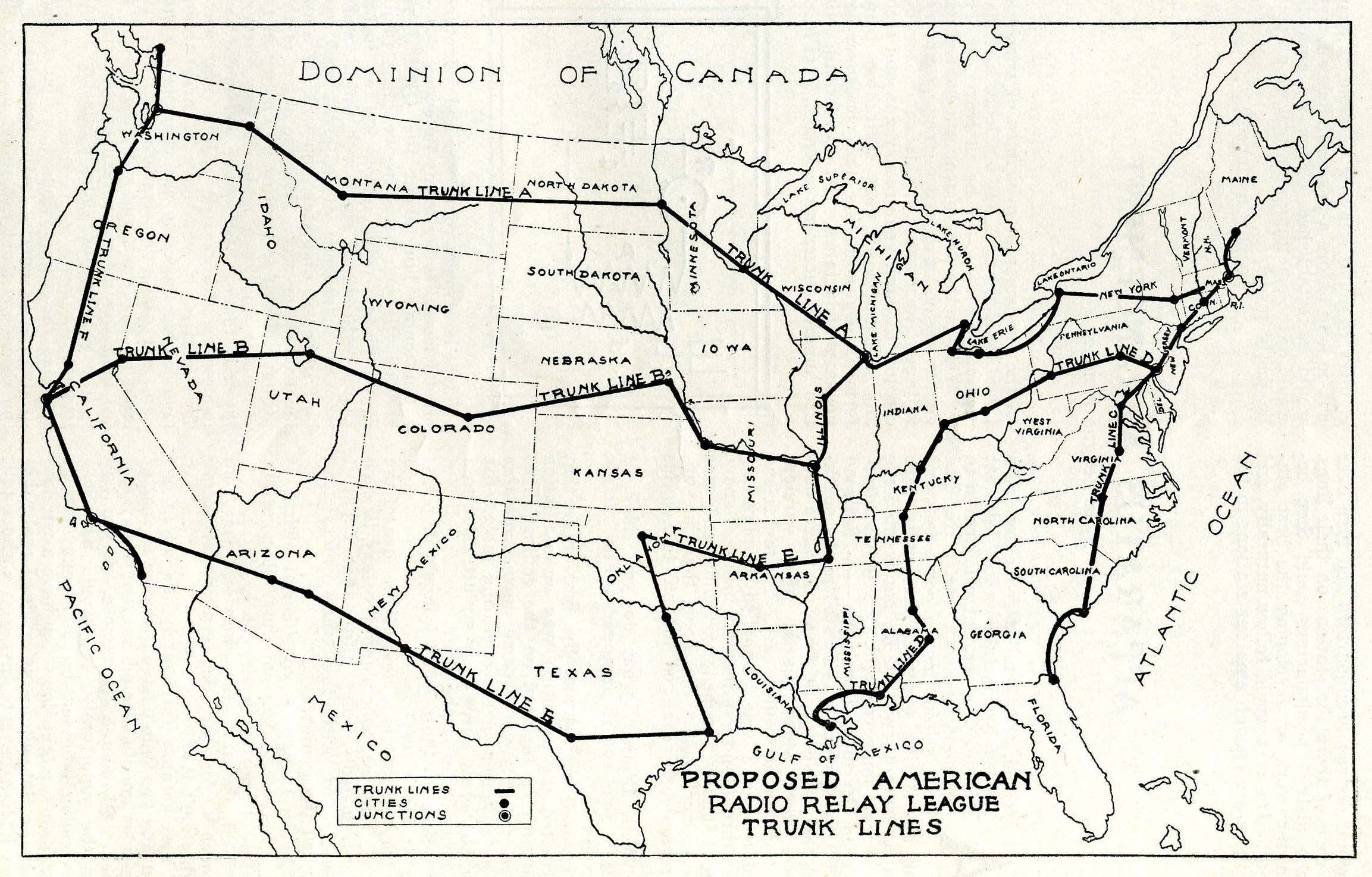 Although the trunk lines were only a suggestion, amateurs apparently latched onto the specific design Maxim had published, judging from the letters he received.2 Eager to establish the local headquarters for the lines and pass along responsibility for getting them organized, he suggested three to start with: in Chicago, San Francisco, and in the east either in Philadelphia or somewhere in New Jersey. These were chosen because they were population centers that lay either at junctions or along more than one trunk line. One prerequisite was that each HQ should be chosen for their operator’s organizational skills. Another was that they would always meet their test message schedules, or get a substitute. Stations that failed to be on the air at the right time were the biggest impediment to amateur radio relaying. Therefore the lines should operate only one night per week rather than attempt it more often at the cost of decreased reliably. The exact time of operation was left up to the discretion of each trunk line, but Maxim suggested that it should be late enough to both eliminate QRM from the little boys and to be after the time when most movies ended at theaters. But he also advocated operating at the same time all across the country in order to try to set new records—for example, to possibly complete a round-trip Chicago to Maine relay and acknowledgement in 15 to 20 minutes.

Message and acknowledgement formats should contain the calls of all the relayers so as to be able to constantly evaluate the system and detect dead ends. Finally, he asked again for help from the local amateur radio communities in figuring out who should be district HQs—ARRL HQ did not know enough about the individual stations to make that determination.

One woman stood out among the stations of the nascent relay network. Mrs. Emma Candler, 8NH (later 8ER) of Marysville, Ohio shared a station with her husband, Charles, but was by far the more active of the two.3 Trained and employed as a telegraph operator at the Marconi Company, she quickly became a proficient wireless operator when she got on the air in 1915. Early in her amateur career, tired of being referred to on the air as “OM,” she one day told another amateur that she was, in fact, an “OW” and from then on was known as such to her friends. She became ARRL Central Division superintendant until after the war when a career teaching math kept her from resuming her League role.