Driven by rapidly expanding and radically changing uses of radio, a fitful and frustrating process of legislative and regulatory proposals and counterproposals was just beginning and would continue for a decade or more before it would begin to stabilize.

As spring arrived in 1922, new broadcasting stations packed the air with signals as growing crowds of listeners in the general public clamored for even more. Ten years had brought changes unimaginable in 1912 when the first radio law was enacted.  Now woefully inadequate, it urgently needed to be rewritten or replaced. That task fell to Secretary of Commerce Herbert Hoover who convened the first radio conference, which included radio luminaries from across the spectrum: government, industry, academia, and the amateurs.

The conference and its governing commission concluded by recommending twenty-two wavelength allocations.  These would form the foundation for new legislation to finally replace the outdated law.1 Among the twenty-two, amateurs were assigned a band from 275 to 150 meters, divided into sub-bands for spark, modulated CW, phone, and straight CW, in that order, from long to short wavelengths. The portion from 275 to 200 meters would be shared with educational establishments. To avoid overcrowding in each geographical region, the commission also prescribed a list of practices to be followed when assigning wavelengths to individual stations within each radio service.

Dividing lines between services were still not sharply defined. For example, the conference explicitly proposed that amateur broadcasting again be allowed, reversing its previous position. And it recommended “that direct advertising by radio be absolutely prohibited” – either ignoring or attempting to counter the inexorable pursuit of commercial opportunities in broadcasting.

In early June the legislative process began again with bills introduced in the Senate Committee on Interstate Commerce by Minnesota Senator Frank Kellogg as S3694, and the next day in the House Committee on the Merchant Marine and Fisheries by Congressman Wallace H. White of Maine, who had also been a member of Hoover’s conference commission.2 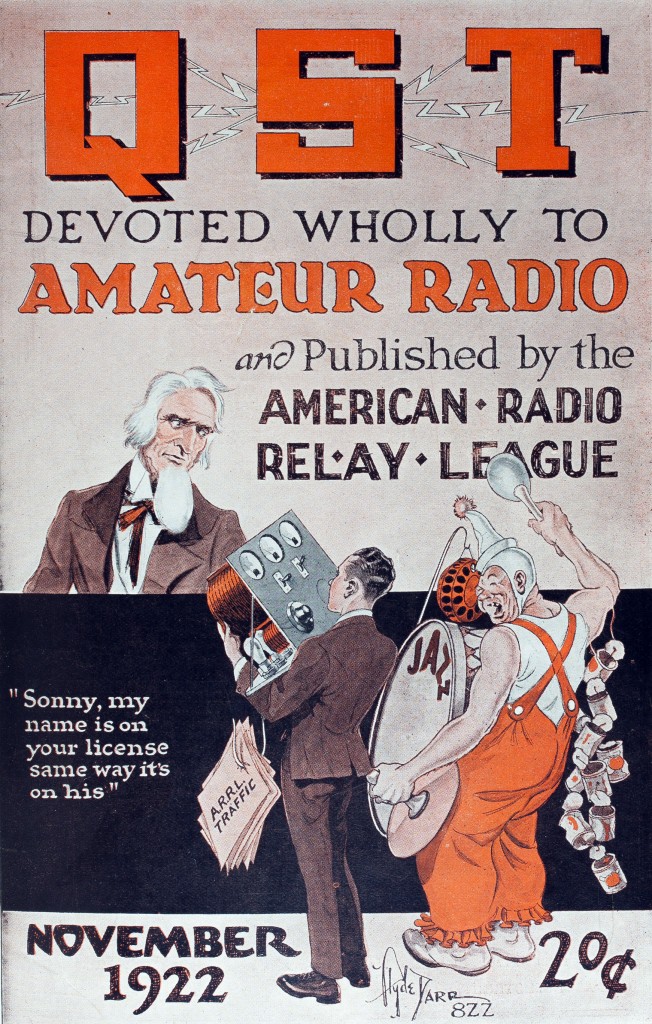 Following the conference’s recommendation, the bills would amend the 1912 law rather than replace it. Commerce’s main purpose was to expand the wavelengths available to broadcasters, and define a regulatory mechanism for all services. But the proposed law did not actually specify wavelength allocations or license classes. Instead, it gave authority over such matters to the Secretary of Commerce. Looking on the bright side, the ARRL expected this to finally impose some order on the chaos caused by the phone broadcasting boom. But although Hoover’s commission had unanimously recommended that the new law explicitly define the status of the amateur service and its allocation, such a definition had been left out and that was worrisome. Although “private” operation was defined as being permitted between 275 and 150 meters, interpreting that as a grant of wavelengths to amateurs would be “quite a stretch of the imagination” as judged by ARRL secretary Kenneth Warner.

The first three sections of the old law would be replaced in their entirety. Section 1 had stated that no one could transmit without a license granted and regulated by the Secretary of Commerce. In the new law, the role of the secretary would be defined more explicitly: to classify stations and operators, define their service, assign bands, make and manage regulations, characterize transmissions, and assign call letters. Only the president could overrule any of these actions. Furthermore, stations owned and operated by the US government for official business were exempt from the Commerce Department’s regulations. In time of war the president could close down any station of any type and remove its apparatus or use and control it while compensating the owner (how was not specified, only that it should be “just”).

None of the old law applied to signals confined within a state or territory, unless their effects extended beyond its boundaries or interfered with the reception of signals from outside. The 1912 law referred to the use or operation of “any apparatus for radio communication as a means of commercial intercourse.” The 1922 rewrite spoke instead of its use or operation “by telegraphy or telephony as a means of intercourse.” It was therefore more specific about modes and was broader in purpose, pertaining not just to commercial uses but to any communication.

Section 2 of both the old and new laws dealt with the handling of station licenses and their non-transferrable nature, precluded granting them to foreign interests, and prescribed how licenses would be managed and revoked. No license could be valid longer than ten years but they could be renewed. The laws also protected against manufacturers using a license to monopolize radio communications.

Section 3 of both laws specified that operation of a licensed station must be performed by a licensed operator. However, the new law required such licensees to demonstrate proficiency in the operation of radio apparatus and in transmission and reception of radio telegraphy and telephony.

New wording in section 4 set forth rules for station construction. It specified that a station could not even be built unless first permitted by the secretary. Such a permit could be revoked if operation did not begin within the time specified in the application. Furthermore, granting a construction permit did not imply or guarantee that a license to operate would be granted at all. On the surface this meant that investing in building a station would be done at the station owner’s risk.

The new law’s section 5 would establish a twelve-member advisory committee that the secretary could assign to study various matters relating to his regulatory mission. Six members would come from the Departments of State, War, Navy, Agriculture, Post Office, and Commerce. The other six would be chosen by the secretary from among non-government people prominent in radio.

Section 6 would specifically require radiotelephone stations that were capable of interfering with ships to have an operator constantly listening for distress calls while the station operated.

In the original 1912 law, Section 7 itemized references to wavelength allocations. Now they would be stricken entirely since their assignment would become the job of the secretary.

The remaining four sections dealt with administrative matters, including fees for amateurs.  The secretary could charge yearly licensing fees on a scale working down from $10 for special amateur stations and $2.50 for other amateurs, to 50¢ for operator licenses, both first and second class.

The ARRL board spent weeks analyzing the bill to formulate the League’s position and recommendations in time for a congressional hearing on 2 January 1923, at which Maxim presented the proposed amendments.3 He believed that the presentation, well received by the diverse set of interests present, reflected well on amateur radio, writing,

One could not escape the conclusion that we organized amateurs have commanded the respect of the general public. It seems to be the idea that we have business like methods, good American virility, a dear and also a broad vision, and that we know what we want and how to ask for it.

A transcript of Maxim’s testimony before congress filled more than three pages in QST. He began by summarizing the services amateurs performed during the war and the potential for continued service to the country in times of emergency. He then told of the many technical and operating accomplishments that had been led by amateurs over the years. These were reasons why the amendments he was about to propose should be seriously considered. He offered a financial reason too: the fact that 16,000 amateurs altogether spend about $1.6 million per year on their activities, and that made them “worth having around for this reason alone.”

Maxim discussed the general attitude of hams toward the bill, describing the caution with which all such bills introduced in congress were analyzed, to protect the amateur service. He stressed that amateurs unselfishly embraced the modernization of radio law, having been unjustly blamed for interference to broadcast listeners when the real problems had been things such as static, commercial stations, and electrical noises of various sorts. Maxim cited the voluntary quiet times observed by amateurs even though the 1912 law gave them the right to transmit at any time they chose.

So, with simply a desire for “fair and reasonable treatment” the amateurs proposed a set of eight amendments to the White bill, laid out in detail, section and line, presented by Maxim during his testimony. The most important one was the explicit mention of amateur radio as one of the classes of stations and operators that the secretary would regulate. Equally important was excepting amateurs from the subjective judgment of whether a particular station was “in the interest of the general public service,” as the bill termed it, before a license was granted. 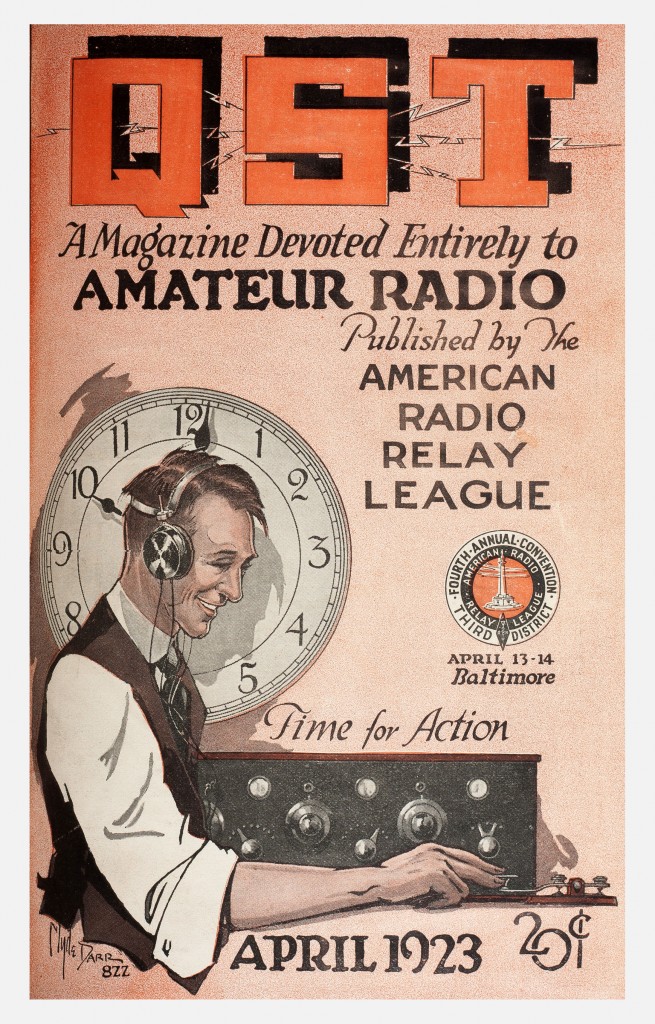 As written, the law did not say how that judgment would be made, and Maxim worried that it could simply be interpreted to exclude an amateur, or all amateurs for that matter, from qualifying for licensing if they were deemed of “no direct and immediate public service.”

Aside from improving the wording, the ARRL’s final amendment was to make more explicit the preferential treatment given to a government station by more precisely defining what that was. The League was worried about the term being construed as applying to any station, commercial or otherwise, engaged in handling any messages for the government.

In the end, all this hard work proved to be merely a rehearsal for what was to come. The months of effort spent attending the conference, reviewing recommendations, and modifying the proposed legislation came to naught this time. The White-Kellogg bill died when Congress recessed a few weeks later, having met opposition in the Senate that could not be settled in time. In an effort to quickly regroup, Hoover called for another conference on 20 March to see what could be done under the flawed existing law to immediately deal with the broadcast and interference situation, such as freeing up additional wavelengths.

Meanwhile, the ARRL Board of Direction urged all amateurs to observe a variant on the Rochester Plan, a time-sharing scheme, and “refrain from transmission of any kind, for the good of our game” between 7:00 and 10:00 p.m. local time, except where local agreements already extend further. To emphasize the plan, the 8ZZ cover drawing for April 1923 depicts a ham sending something on his key, a big clock in the background, hands just past 10:00—“Time for Action.”

It was once a wild, unregulated, wide open wireless world. To control the chaos, in 1912 the communal air was cut up into parcels of choice spectrum real estate, with hams relegated to the desert just outside the fence.  Ten years later the next wave of change was just beginning, emerging from the broadcasting boom.  This time, active participation in the national radio conference, Hoover’s endorsement, and Maxim’s testimony had all firmly established amateur radio as a peer among the other services.

But with a growing sense that the airwaves were owned by the public, accommodating broadcasters became the overriding concern and all other services were expected to give something up.  Hams were largely willing to comply because they believed that the only way to preserve amateur radio was to get ahead of the trends and voluntarily control, sometimes restrict, their own activity lest they be forced to. And this would intensify as the development of the shortwaves in a few short years makes long-distance signals easy, borders permeable, and international agreements necessary.

The establishment of bands of spectrum to each service will be welcome but increasingly restrictive. Tightening regulations will force hams to develop better equipment, to stay inside their own bands, to eliminate interference with each other and other services, and to get signals that are narrower, cleaner, and more stable.

It will be nearly as big a revolution as the move from spark to CW.