CQ, usesd as a general call for initiating a contact, took time to become an acceptable practice in the early years. Serious operators frowned on its use, mostly because it had been used to excess in the old days among the “little boys with squeak boxes,” usually in exceedingly long and sparsely identified calls. 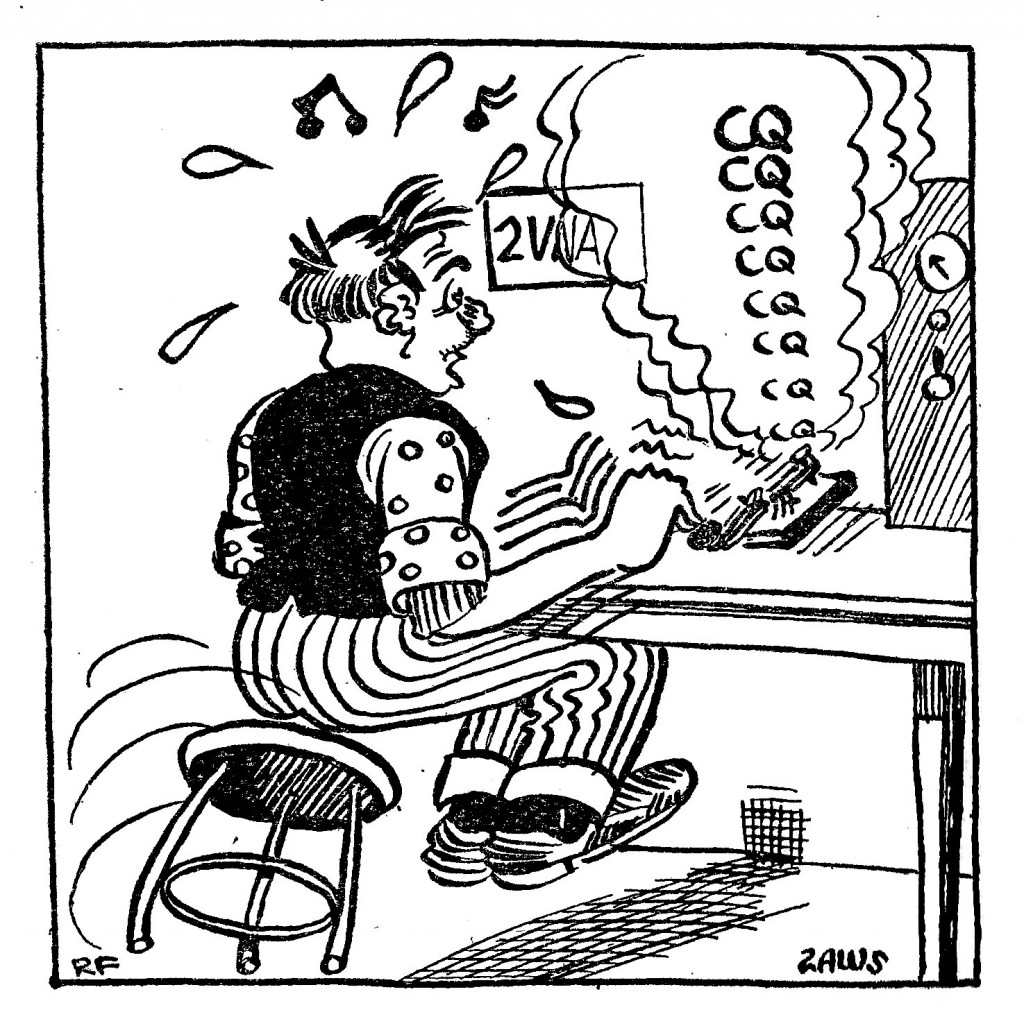 In March 1921, QST announced an operating event called the “ARRL CQ Party,” to be run on April Fools Day.1 The writer (unnamed) asserted that CQ meant that “some bird is causing unnecessary QRM,” and that the ARRL Operating Department had “declared war on ‘CQ’ as an outgrown antique.” Beginning at midnight, participants were to call CQ with high power and “any old speed” according to a schedule that allocated a 3-minute time slot to each call district. Thus everyone who was not transmitting could see how many districts they could hear, which might actually be useful. This would end at 12:30 a.m. when all stations in all districts would call simultaneously, nonsensical by design. “Maybe Mars will hear us,” they wrote.

The party really did run and was enjoyed for the farce it was. “There were almost as many ‘HI’s floating around as there were CQs showing that most of the gang appreciated the spirit of the thing,” noted ARRL secretary Kenneth Warner.2 But its other purpose was to discourage calling CQ during relay schedules, and to “to show up the foolishness of the unholy amount of CQ-ing that has gone on every night all over the country, causing untold interference that is so unnecessary. Persistent CQ-ing is nothing less than a bad habit, accomplishes nothing good whatever, and merely breaks up communication in nearby states,” scolded Warner.

CQ had its origin in maritime wireless, used by ships seeking nearby stations to which they could pass messages. So, although calling CQ was labeled “a nuisance” by Warner, he also allowed that it might still have a legitimate, similar use in traffic handling.3 Nevertheless, interminably long CQs with hardly a call sign mentioned were bad form and just caused QRM, he cautioned.

Over the next two years, either attitudes and behavior had changed, or the use of CQ became too pervasive to do anything about, or both. In late 1923, Warner wrote yet again about the practice, calling it “a great evil in amateur radio today.”4 But he equivocated, admitting that there were amateurs on both sides of the issue—those who use CQ all the time and those who believe that its use is cause for license revocation—and that neither was right.

He cited cases where it had value: briefly announcing one’s presence on the air, and directional calls for a particular region with the intention of sending traffic. The abuse of CQ was the problem. Some amateurs would call long CQs just to get listeners to send a reception report card. This, he asserted, was “unjustified abuse of the ether.” (One wonders if there was such a thing as justified abuse of the ether.) But long CQs, in hopes of starting a QSO, were also nonsensical, argued Warner, since they often had the opposite effect, and “good amateurs refuse to answer the long drawn-out CQ of an ether-mutilator, and oftener than not nobody will stay with you while you consume ten minutes calling—there is too much on the air that is interesting.”

A good example of proper CQing was 6ZZ, who was considered a gateway station, key in connecting regions for relaying message traffic. It therefore made sense for him to announce when he was available. He used a single CQ and a single call for such an announcement, and then would stand by for fifteen seconds before trying again. “Let’s be more reasonable about this thing, fellows, and stop abusing CQ,” implored Warner.

F. M. Keefe, aboard the S.S. Tomalva in Rotterdam, wrote with humor to add his own voice to the complaints about never-ending CQs.5 He regularly spent time trying to copy calls so that he could contribute to the Calls Heard section of QST. But he had finally had enough:

… after straining my ears, patience, and vocabulary t’other night while following an Endless Chain of See Kews that never signed, or faded just before the psychological moment, I decided that things ain’t what they used to be. Having cast my decision, I proceeded to cast the remains of the Remington6 at the ship’s cat, (don’t possess a Corona as per 6ZZ). Missed the cat and hit the 3rd mate on the knee and he QSL’d with a right hook to the jaw that would have done credit to Jack Dollarksy himself. He has no sense of humor, I guess, ‘cause how was I to know it was his lap the cat was sleeping on? But that’s a different story.

According to Keefe, ships in the Atlantic had less time to listen the further east they sailed, due to the time difference and the ever earlier dawn. Thus his frustration arose from wasting his precious listening time on CQ callers. He endorsed the idea that stations using long CQs should never be cited in Calls Heard to discourage their “ceaseless, senseless, endless CQ-ing.”

While some amateurs continued to shun its use and actively avoided answering stations calling CQ, others saw that it had a valid purpose. Traffic Manager Fred Schnell set out to establish guidelines for its use as a “standard ARRL practice” in early 1924.7 His concept still focused on handling message traffic rather than its present day use as a general call for a QSO. Its purpose, he stated, was to “indicate that a station wishes to communicate with another station…” meaning, “the calling station has traffic for some other station.” However, he facetiously acknowledged that in typical amateur radio use, “CQ has had a meaning which goes something like this: ‘I want some DX cards (which will never be QSL’d); will somebody please answer who is at a distance greater than 2,000 miles so I can tell him nil hr drp crd cul 73 gn.’8 It has degenerated into the call of the DX-Card Hound who seldom acknowledges receipt of a report card.”9

The guidelines Schnell set forth had mostly to do with timing—never call CQ too long, listen for at least five minutes before calling, and do not call CQ more than once or twice in fifteen minutes. Three CQs and three call signs was the standard format he suggested. And it was to be used to announce that you were ready to receive traffic. If you had traffic to clear you should first listen for a station already on the air located closer to the message’s destination.  If none was heard, a directional CQ was called for, as in “CQ north” or “CQ Washington.”

From the earliest days, hams used postcards to send reception reports to fellow amateurs. Two-way contacts were not always possible and this was one way to let station operators know their transmitters were being heard. The reverse case also happened. An operator who saw his station’s call sign listed in the Calls Heard section of QST would send a card to the listed receiving station inquiring about its receiving setup. In both cases a reply was expected but not nearly often enough sent. Unanswered QSLs was a frequent complaint even back then.

The practice of sending reports by postcard dates back at least as early as 1916 when first mentioned by Edward Andrews, 3TQ, in a letter to QST. Andrews wrote how very valuable a reception report by postcard really was,10 and commented that he had never seen it mentioned in QST. In agreement, the editor suggested this was a great way to keep amateurs in touch with each other and better understand the range of their signals.

Carl D. (Don) Hoffman, 8UX, had been drawing cartoons for QST since the fourth issue when he signed 8ADU, his pre-war call.11 In between, Hoffman served in the Military Intelligence Service, Radio division. He had set out to be a cartoonist and attended an art school for a while before quitting to open a radio store, then sold it to work for the Republic Electric Company. He was also the editor of a radio column in the Akron, Ohio newspaper. 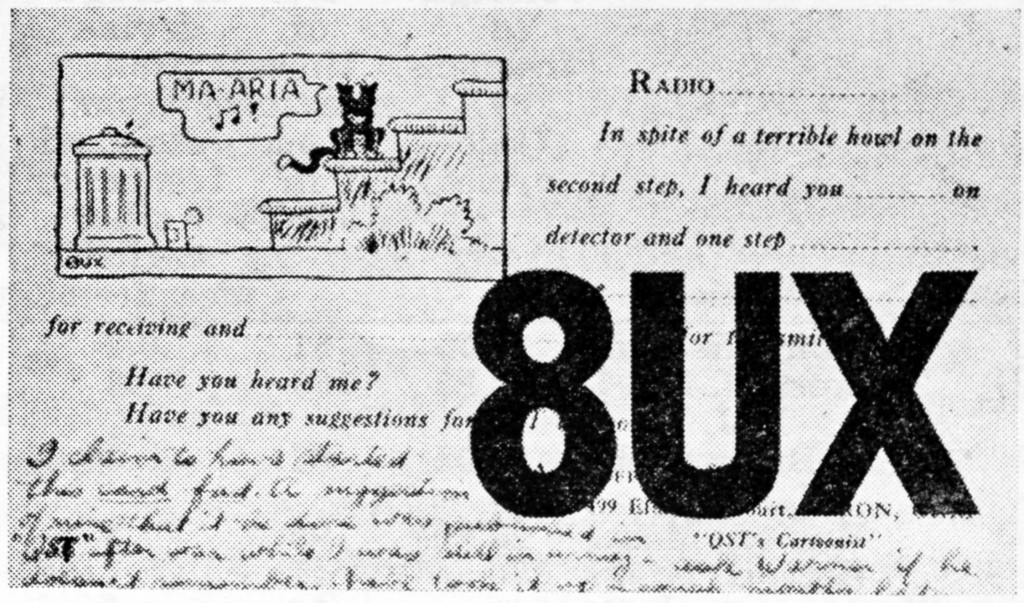 Hoffman wrote a letter, published in the August 1919 issue of QST, that mentioned “using post cards to let the other fellow know you heard his signals.” Despite the 1916 letter from 3TQ, QST credited Hoffman with originating the post card QSL idea.12 He had also suggested what information a report form should contain. Hoffman had been sending such cards before the war (perhaps that’s really why he got the credit, not his 1919 letter) and received many thanks from hams whose stations he heard. As “inventor” of the QSL card, although it was not yet called that, “This letter was the beginning of the idea that has,” by early 1924, “developed to the point where every amateur station has its walls filled with these printed post cards,” wrote the editor.

The attribution stuck, and in September, Howard S. Pyle, 8ST, wrote about standards for Amateur DX Report Cards, which he called “the international fad that 8UX started.”13 Pyle argued that the only basic pieces of information that really should appear on cards were the call sign and address of the sender, the time and date of the received transmission or QSO, and “possibly also the wavelength.” Furthermore, he asserted that information about antennas and equipment was superfluous. And besides, it was better to leave blanks for such things since they changed so frequently.

Clearly a minimalist, fancy design was something Pyle just could not fathom or tolerate. He criticized the use of pale colors, pointing out that they do not photograph well in (black and white printed) magazines. And using lots of colors and flourishes was best left to those with some actual artistic talent, lest you “make yourself and your station ridiculous to the fraternity.” Besides, single color cards were less costly, too.

Lastly, he criticized “near-funny” cards, writing that, “there are actual born humorists in the world but judging from the cards [that he had seen], there are surprisingly few in the amateur fraternity while the efforts of the would-be’s are rather disgusting. Avoid cheapening your card by a display of vaudeville humor” (whereas cheapening its appearance by using all one color was apparently fine).