Humor played a prominent role in QST from its first issue, born of the evident joy hams derived in pursuing their passion for radio.

The first curious attempt, in the first issue, two pages from the back cover, was not an article at all but a reprinted letter. It had been sent in by a Japanese radio student, identified only as Kathis Kathan, of Hynacus, who attempted to ask a technical question in painstaking, but painfully broken English—the main source of humor and confusion.1

Despite this, the student seemed to be posing a fairly deep question: In a condenser, the dielectric is the heart of the device and is the material in which charge is stored, he wrote, and seemed to cite his interpretation of English technical papers to back this up. But, he then asked, how could this be true for air dielectric condensers, since he could blow the air away and still have charge left? It was quite a reasonable question coming from a beginning student trying to get a foundational understanding of a device that was fundamental to radio. Exactly where charge is stored was his main source of confusion. He closed his letter with, “Explanation me Honorable Radio Secretary for which accept my assurances most distinguished consideration,” referring to Tuska.

The letter and its appearance in QST are difficult to figure out—especially the name Kathis Kathan, which is distinctly not Japanese sounding, and the location which does not seem to exist today—except that young Tuska probably found the letter hilarious. The secretary of the League offered a $5 reward to readers for the best answer as judged by its “funny side or technical value”—in that order. The responses appeared in February QST and the promised award was announced. Some respondents attempted to be humorous; one seriously tried to answer the question but interpreted the original letter differently from how I did. 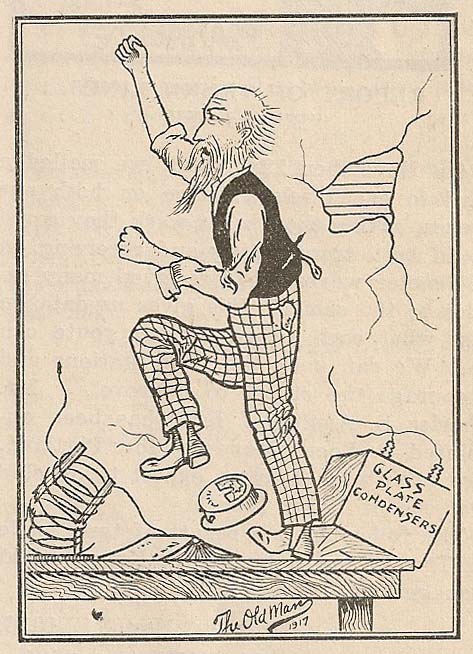 The Old Man, the pseudonymous author of a long running humor series, made his first appearance in the second issue of QST writing about “Running Tests between Amateur Stations”—a non-humor piece.2 He described a scenario in which two hams set up a scheduled contact, trying to work each other over some long distance despite the party line nature of radio at that point, only to have their attempt foiled by a combination of household distractions and boys making long transmissions using spark coils. There was a need, he asserted, for scheduled, widely agreed-to times for relay testing when other “unimportant amateur work” would keep quiet. He suggested a 30-minute window each night between, say, 8:45 and 9:15. “Little boys” with spark coils and a few dry cells were the usual source of casual interference, he wrote. Times between 7:30 and 10:00 p.m. were particularly problematic. Therefore, another way to avoid interference would be to wait until later in the evening, when “the little boys have been tucked away for the night.” Later he allowed that, of course, the boys should be encouraged to “practice radio signaling” but that surely it should not be so difficult to keep quiet for a few minutes each night.

The little boy with the squeak box thus became a frequent target of complaints about QRM (interference). But they were not all little boys, and an alternative view began to assert itself. QST began receiving mail complaining about the frequent disparagement of the little boys with squeak boxes. Not only were these individuals frequently mature adults, but spark coils were routinely used for long distance work and to participate in links in the relays. The devices were also more efficient, some argued, as measured in distance per watt, than the transformer stations. (This sounds like the QRP/QRO argument today.)

Nearly a year after The Old Man’s piece was published, the editor (likely also Maxim) wrote in response, “For our share in this thoughtless aspersion of the spark coil, we apologize in public and in print.” Now about the “little boy” part—QST may have gotten the age wrong. But the abusers, whatever their age, did exist and were causing “untold misery” to other operators. Nevertheless, he wrote, “To the little boy … who is well behaved after nine p. m., and the spark coil who is always well behaved if the vibrator is kept clean, we extend the glad hand of fellowship. All of us were once little boys ourselves, many of us are little boys yet, and practically all of us had our whack at the spark coil before we got there, in radio.”3

Radio was not just for the male of the species, either. Women and girls interested in wireless were welcomed in a fashion, but treated as rare curiosities. In the first reference to one in QST, R. M. McLain of Huntsville, AL, wrote a letter reporting that while traveling in the hills of northern Alabama he came across a young lady, about age 17 he estimated, working on an aerial.4 She was definitely a radio enthusiast—“I am crazy about it,” she said—and was constantly repairing this particular aerial every time the wind would blow it down. McLain also noticed various farm animals and a spinning-wheel apparently still in use, and commented how this was certainly an unusual girl, able to “operate anything from an old spinning wheel to a modern wireless telegraph.”

The humor tradition resumed in May with the inaugural installment of the long running series of rants by The Old Man (TOM) that would come to be known as the “Rotten” series, since their titles all included that word. With time, people generally accepted as fact that the humorous kvetch was HPM himself, but there was no conclusive proof or admission published until after his death, years later. This makes the back-and-forth between TOM and the QST editorial page about the “little boys with squeak boxes” all the more amusing—both were unsigned, and both had probably been written by Maxim.

In “Rotten Sending,” aside from criticizing disproportioned Morse code elements, TOM complained about the increasingly popular practice of using abbreviations and shortened spellings (hv for have, nite for night, etc.), most of which have been in common use for a long time today.5