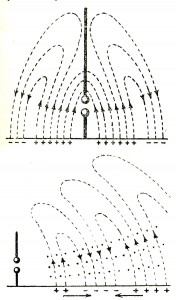 Although the mainstream press frequently covered advancements in radio, QST was one of the few published sources of practical, technical information available to amateurs. The articles would present enough technical detail to be useful but were written to be understood by most amateurs and therefore were more accessible than papers in professional journals. Prominent researchers in radio engineering, such as Edwin Armstrong and Frederick Terman, were also amateurs and published articles in both communities.

In the first technical article to appear in QST, ARRL co-founder Clarence Tuska wrote in the inaugural issue about visualizing electromagnetic waves. He made a good attempt at explaining their origin according to Planck and Hertz, and extrapolated to say why mountains were bad for propagation and open water was good. Atmospheric propagation, or “Skywaves,” were as yet unknown. His diagrams showed field lines becoming detached from an antenna and propagating along the ground as giant loops, similar to how it was being portrayed in textbooks of the period.

The Radio Club of America was formally introduced to League members in a QST article.1 Its introductory banner stated that, just as the ARRL was the leader in relay work, the R.C.A. was the leader in “practical amateur theory,” and the two ought to become “better acquainted through QST.”

Monthly R.C.A. meetings at Columbia University featured presentations of technical papers on recent developments by leaders in the field and provided hams an opportunity to socialize with other radio enthusiasts.

Edwin H. Armstrong was president, and noted receiver expert Paul F. Godley was a director and chairman of the publications committee; both were amateurs active on the air. In fact, all R.C.A. members who were also active operators were ARRL members too.