Despite the political and regulatory-control disputes between amateurs and the Secretary, the Navy well understood how much it had benefited from all the trained amateurs ready to volunteer for service during the war and the likelihood of needing them again someday. In August the Navy announced it would begin broadcasting test messages containing weather information and text for code-copying practice at 15 and 25 words per minute every night on 476 meters from NAJ, the Great Lakes station, “in order to maintain the interest of the radio amateurs and keep them in operating practice.”1 The messages would be broadcast using a simple encoding, with the code ID number being sent first. Presumably this was for practice in decoding messages but probably also to promote accurate copying without the benefit of context and word prediction. The Navy also asked the League for suggestions on how this might work better—a good sign of intended cooperation coming from a former antagonist in congress. 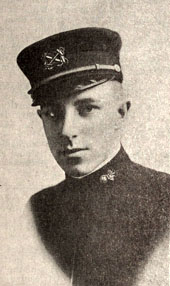 R. H. G. Mathews in uniform during the war

R. H. G. Mathews, who had served in the Navy during the war and was now ARRL vice president, cited the historically tense relationship in his reply: “The average amateur has always been a little afraid of the Navy, partly because he was not as well acquainted with it as he might have been and partly because it was not as well acquainted with him and his uses as it could have been.” But its inaction speaking louder than its words, the Navy had as yet done nothing to reopen amateur operation.

In the August editorials, “The Lid” referred not to a poor operator but the one clamped down by the government on amateurs’ operations.2 After getting hopes up for a planned August 1 lifting (and ARRL having drafted an editorial to that effect), the Navy declared the lid would not come off after all, until the president had officially declared a state of peace. Of course, such a declaration would also mean the Navy would no longer be entitled to control the amateurs anyway. “In other words, the Navy can let us start any time now but refuses to until they can no longer prevent it,” wrote Warner, and he speculated that amateurs may have to wait even longer for the Senate to ratify the president’s declaration.

Meanwhile, the Department of Commerce outlined its policy for amateur radio after resumption of operation: (1) All licenses have expired and everyone will have to be retested, this time at an increased code speed of 10 words per minute (instead of 5). (2) A separate application for a station license must follow the construction of a station. However, expecting of a flood of new applications, the Department would allow operation to begin upon simply submitting a station license application. (3) Call letters would be issued from scratch; old ones no longer existed and it would not be possible to get them back. But then, in contradiction, they stated that if someone wanted his old call he could apply for it and, if it remained unissued, could wait until that call came up in sequence! It wasn’t quite clear who would do the waiting. (4) The Department would not be issuing very many Special licenses, which would be more restricted than before the war because of the anticipated increase of marine and air traffic.

“Our heart is heavy, friends, over this delay in getting back on the brass, but we know it will be only a short while yet, and then—The Days of Real Sport!,” wrote Warner.

A draft of a new radio bill emerged in Congress on 28 August, proposing to repeal the 1912 law. This time it provided for various classes of service including amateurs, but placed regulation under the authority of a “technical radio committee,” which would have a member from each “department of government,” instead of laying out such regulations explicitly in the bill itself. This would place governance of amateur activity in the hands of a committee without public hearings or other recourse should they decide to regulate amateurs out of existence. Although the bill recognized amateur radio explicitly, it was still clearly unacceptable.

As fall arrived, fully ten months after the armistice, mounting impatience led ARRL to investigate the lack of action in Washington.3 They discovered there was more to the issue than simply waiting for official peace to break out. Yet another proposed bill appeared, this one authorizing the Navy to use its stations for commercial purposes. At the same time, Navy Secretary Daniels wrote to both houses of congress asking them to further consider establishing a commission to study the “radio problems,” authorize the president to define wavelength bands for “different classes of work,” give the Navy monopoly over ship-to-shore and intercontinental radio, authorize the Navy to use its stations commercially and assist companies in developing radio.

In response, the Senate Committee on Naval Affairs asked the Navy to draft legislation for its consideration, while in the House, the Committee on Merchant Marine and Fisheries was also taking up the matter. The ARRL expressed alarm that there was no mention of amateur radio at all in this exchange, distrusting the Navy because of its previous attempts to eliminate amateur radio. And since the reopening was being delayed personally by the Secretary of the Navy with no stated reason given, the League suspected that they wanted to push through a bill before losing control under the current law.

This time, however, the Navy expressed sympathy for the amateurs and a desire to eliminate the distrust. While the League viewed the lack of any mention of amateur radio as nonthreatening per se, it took the position that such an omission would leave amateurs in legislative limbo and made it clear that any new bill must explicitly define amateur radio’s status. The Office of Naval Communications reacted by inviting the League to express its views of how amateur radio ought to be “recognized in the new law.” The Board of Direction would formulate a response and arrange for League representation at the congressional hearings.

There was still no lifting of the transmitting ban in sight. Assistant Secretary of the Navy, Franklin Delano Roosevelt, assured the League that he would personally “radio Mr. Daniels” about it—not telephone, telegraph or write him, mind you—and amateurs might hope to know their status soon. Warner commented that “The whole proposition is so basically unjust, so uncalled for, that we do not believe it will long obtain. This seems to be an entirely different matter from the question of a Navy monopoly on commercial radio, and we see no reason why we should be compelled to await the ratification of the treaty—an act that from present appearances might be judged to be several months off.” Members were urged to appeal to their representatives.

Across the border in Canada the ban had already been lifted on 1 May and lots of activity was starting up there. Canadian hams were regulated in wavelength according to their proximity to a government station (50 meters if within 5 miles, 100 meters within 25 miles, 150 meters within 75 miles) and a half kilowatt maximum primary (transformer input) power. Before the war, Canadian three-letter call signs starting with X were issued, but now they would begin with numbers as they were in the US. A correspondent reported in QST that when war had broken out and the ban went into effect, the police in Canada took the additional step of confiscating essential parts of amateur stations. Hams had reacted by actively trying to hand over comparatively worthless substitutions—such as an old loading coil—to avoid confiscation, believing they would otherwise never again see their parts.4

“Daniels Only Knows” was the answer to why hams in the US were not yet “opened up” and back on the air, according to an October editorial.5 It was another jab at the Secretary of the Navy who was the only person standing between amateurs and their transmitters. The ARRL managed to get a resolution introduced in congress requesting the secretary to provide reasons why the ban had not been lifted.

In The Operating Department, Smith took his own shot at Daniels, calling the continued, reasonless ban “autocratic,” and “un-American.” And in Strays, a one-line entry poked, “Ain’t nature wonderful? Just look at Seck Daniels.”

Even The Old Man got a word in. “Not so Rotten” was his compliment for the author of an article about nonsynchronous spark gaps in the September issue. T.O.M. bade him to “live long and prosper,” nearly 50 years before Spock would trademark the phrase.6 He extolled the virtues of his own rotary gap, “Old Betsy,” never having seen a better set, but now thought this one might have her beat. He ended with his own jab at the Navy for being late in lifting the ban. “Don’t our folks know the war is over?” he asked, suggesting “Somebody send a postal to the Navy and let them know it was all over months ago. I am an American and I want my liberty the same as the Canadians have theirs.”

H. C. Gawler, the New England Radio Inspector, wrote to answer a question he’d received from “droves of Amateurs”—specifically, “What’s the future of amateur radio?” He first expressed belief that amateurs would be largely self-regulating.7 Amateurs who had left for the war as boys were returning as men, expecting to be operating a more sophisticated set of gear with a more sophisticated way of thinking about radio and operating. He used “wooden” to describe the old childish ways and “bakelite” for the modern: “Are these men, having done their bit with bakelite sets going back to the wooden sets of their childhood in the radio game? No, they are not! They are going to have bakelite amateur radio activity. Wooden operators, wooden apparatus, and anything else wooden in the game, will either be taboo, or else be made to look like the real thing, and the kids of yesterday will accomplish these results by their influence much better than the laws would.”

While it would be surprising today, it was not unusual to find a government official, in this case Gawler, writing a letter to QST to address amateurs while also joining as a member. He well remembered the response of volunteers when the war first began, and believed that only by effective organization could amateurs be of service. The government was also wiser now as a result of this and amateurs therefore should not worry about what it would do in the years ahead. His advice was to organize and improve. The government could not afford to do without the amateurs.