While somewhat greater in number than before the war, women hams were still regarded by other amateurs with a mixture of curiosity and amusement. Nevertheless, even before the war several were already experienced as telegraph operators and had become prominent in message handling as amateurs. Coincident with the closing down of amateur activity for the war, an editorial in August 1917 announced that “The Ladies are Coming,” reporting that “several hundred of the fair sex” were now among the brethren, so hams would need an alternative to OM as an on-air label. It was clear that OW would not work in the face of understandably strong objections from those who would have to bear the label. The editor suggested DG (dear girl) as a possible alternative but there was no consensus yet.

As the new decade began, though women were still excluded from many roles and activities in society, including voting, becoming a ham needed no man’s permission, just the will and skill to pass a licensing test.

The first QST article written by a woman appeared in the July 1920 issue, a few pages away from the description of Maxim’s state-of-the-art spark station.1 The author of “How to Build a Wireless Station”2 was twenty-one-year-old Marion Adaire Garmhausen of Baltimore.  She also had written a letter published in the same issue thanking the League for her new membership certificate, of which she was quite proud, but asking the editors to correct the spelling of her last name on it (which ends in ‘n,’ not ‘r’).3 Like other women of the time she was trained as a telegraph operator, but unlike most she had been introduced to wireless as a hobby when she happened to see an issue of QST and wrote to the League for more information. 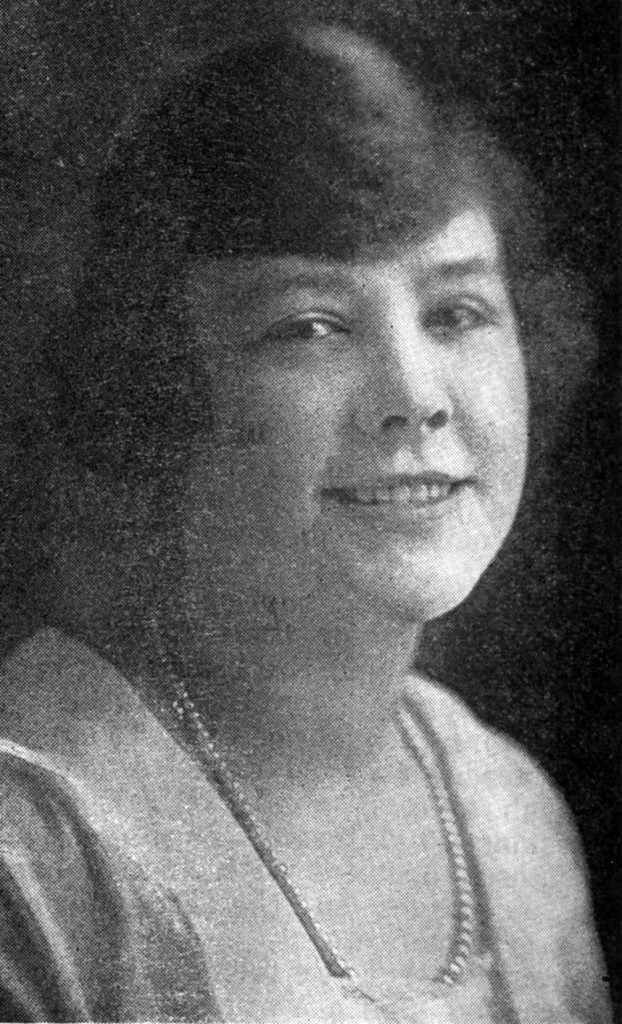 In a box under her article’s by-line the editor wrote “No, we’re not starting a Women’s Auxiliary—not quite yet. But they’re getting in the game fellows, and soon it will be Marcelle Waves4 vs. the Hertzian brand. Mrs. 8ER should watch her laurels. In this story Miss Garmhausen gives an account of how a ‘Ham (F.)’ breaks in.”

With humor that survives time and seems current even today, she described her “efforts to ‘get into the game.’” After longing to “hear some radio,” and then consulting with the wise guys at the local radio shop and enduring their snide remarks, she appealed to her parents to let her put up an aerial on the roof of their home.

Aghast, her father replied that aerials and masts “would be a constant menace” and warned that “the less [she] tramped around on the roof the better off [she’d] be.” Her mother worried that she would make the roof leak and forbade her from ever going up there!

“So, having secured their permission,” she wrote, without missing a beat, “I borrowed a ladder from the lady next door and climbed to the roof.”

Despite discouragement from both parents and admitting to a “decidedly limited” radio knowledge (although she had a commercial license, something she dismissed as simply learning what the book said; applying the knowledge was a “different matter”), she managed to get an antenna in the air. Upon connecting it up, she was thrilled to hear various stations coming through:

…behold! thru the stilly night purred the beloved sounds into my eager ear. And I just want to say, if any of you remember the first signals you ever heard on your own set, AIN’T it a gran’ and glorious feelin’?

She was particularly excited about hearing the time signals from NAA in Arlington.

Pop-eyed with joy I rushed downstairs and embraced my startled mother. I danced a Highland Fling around the kitchen singing, ‘I heard Arlington—I heard Arlington.’ If the lad who had sent those gladsome words had known the excitement he caused in our camp he would have been amazed. Nightly thereafter I listened for the time.

She described improving her setup with a tuned circuit and a disconnection switch for lightening protection. “Go ahead and laugh,” she wrote,

I expect it. But wait till my audion and amplifier arrives that I sent for back in the dim ages. I shall defy a flickering smile to cross one face, for I expect to hear the soup chorus of the Esquimeaux5 at six p.m. every day. And when I have perfection in receiving sets I shall construct a transmitting set that will make the night hideous for the whole United States. One thing I have discovered about radio – is never as hard as you think it is going to be. When you get started everything works out like magic.

Unrelated to radio but pertinent to hams (F.), one month later on August 18, 1920, the Tennessee General Assembly ratified the proposed nineteenth amendment to the Constitution granting universal suffrage for women. It was the thirty-sixth state to do so and the final one required to make it law.6

Garmhausen’s article was such a big hit with QST readers that it led to a series of others shortly afterward. In September, “Beginning at the End” appeared, written by someone identified only as “The Old Woman” inspired, she said, by Miss Garmhausen.7 The writer (possibly Garmhausen’s own alter ego, as T.O.M. was Maxim’s) complained that she must constantly deny being Mrs. Candler, and what a shame it was that women were being passed over for operating positions by the military stations even though they had operator’s licenses.

In a box leading into this article the editor promised to reserve the moniker “T.O.W.” for her if she would continue to write. And, taking his cue from the recent landmark constitutional news, commented that since the state of Tennessee had “recognized woman and admitted her into participation in general activities, so we guess we will too.”

Then in November, QST noted that, “Baltimore will boast of having a Ham (F) this coming winter, but Duvall [E. B. Duvall, 3EM, Eastern Maryland District superintendent] says he is a little skeptical as to the use of the word ‘ham,’ as he is informed that she is equipped with a First Grade Commercial License. He won’t give out her name or call letters yet, but says if anyone mentions the name he’ll whistle.”8

The next spring a poem appeared, addressed as “Lines to Miss M. A. G.”9

Oh Lady Bug! Dear Lady Bug!
If it could only be
That all the girls were just like you,
So quiet, friendly, frank and true
And yet could laugh the way you do-
They’d make a hit with me.
But when I mention Radio-
That fascinating game-
To any other lady-fair,
She’ll wiggle, giggle, pout or stare
Or turn her back and fix her hair;
The poor benighted dame.
Now with you, friend, its different;
You’re ‘there’ in every way.
When e’er talk this wireless stuff
You hold you own without a bluff
And never seem to hear enough.
That’s what I call ‘OK’.
And when you start to slinging code
That’s when I like to be
Asittin’ with my bulbs alight,
The pencil flying, phones clampt tight—
Say! I could listen half the night
When you are at your key.
Now, as I mentioned just above,
If all the girls could be
As nice as you, and use their heads
For other things than millin’ry spreads
And paint displays in creams and reds,
They’d sure appeal to me

Garmhausen published her second QST article10 in May 1921, a humor piece in which she talked about “breaking out with the Hookups,” a story of becoming obsessed with trying new arrangements of apparatus, never quite getting it right, and finally returning to what she started with, but with less money for all the effort.11 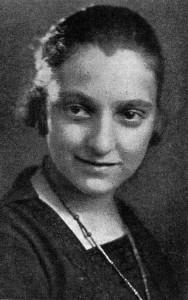 The cover of that issue depicted a woman wearing headphones—the fifth time a woman had appeared on the cover of QST, and one which drew several letters. The illustration, a drawing of a well-known local model (unnamed), had been donated by The Grogan Photo Systems Company of Milwaukee, which did commercial illustrations. Its publicity manager was a member of the local ARRL affiliated club and had arranged the donation.12

Under the call sign 3BCK, Garmhausen was profiled in QST the following year,13 along with another prominent YL, twenty-year-old Winfred Dow, 7CB, who had been active on the air since 1916, took second prize in the Washington’s Birthday Relay test, and was currently ARRL District Superintendent in Tacoma, Washington.

Garmhausen bacame known as “the first YL”—a sort of female version of Vermilya, even though in the presence of 8NH (now 8ER) and 7CB she clearly wasn’t—and was mentioned as such in QST as recently as 2002.14

A Strays column in 1920 started off with this YL item:

Dear V.T.-
Questions concerning Anything (F.) are beyond us. We’ve found out that we don’t know anything about ’em. But why not?
Yours, Ed.

Further illustrating the conditions women endured to work in wireless, Edward T. Jones wrote a letter to QST on the subject of women in radio—“Give the Fair Sex a Chance.”16 He started out amusingly:

A great majority of radio bugs will no doubt disapprove of my suggestions in that behalf, because they would rather have the fair damsels where they can throw their lamps at em’ now and ‘en—so to speak. Especially so now-a-days with those low cut ‘everythings.’ You know what I mean. Then you young rascals must remember that there are the serious minded gentlemen who have either lost their eyesight or have been married so long that their only wish is to die. However, they want to see the Radio Female enthusiast given a chance and I am one of those type.

He went on to suggest that since women who were interested in radio had “absolutely no chance” to progress up the ranks of commercial wireless operators because companies would never assign them to be operators on a ship, apparently a prerequisite for further advancement. He suggested an alternative that would even be acceptable to the “cons on the suffragist ticket.”

Everyone who has held an executive position in a Radio Corporation or in a corporation related to Radio in some way or another, knows only too well the trouble experienced in breaking in a female stenographer. The radio terms just make her sick—she never knows (nor cares to know) what you are driving at…

Therefore, as an alternative to the inaccessible path to advancement as an operator, he suggested that they instead could combine radio knowledge with stenography and become a valuable asset to any company involved in radio—a “radio stenographer.” He said they’d be in high demand since regular stenographers were so unfamiliar with radio terms that it might as well be a foreign language.  “I myself would prefer to have a woman of this type,” he wrote, asserting that the position ought to pay “much more” than a regular stenographer.

Though he tried sincerely to argue in their favor, one wonders if women interested in radio operating would really have been satisfied to simply be writing about it.