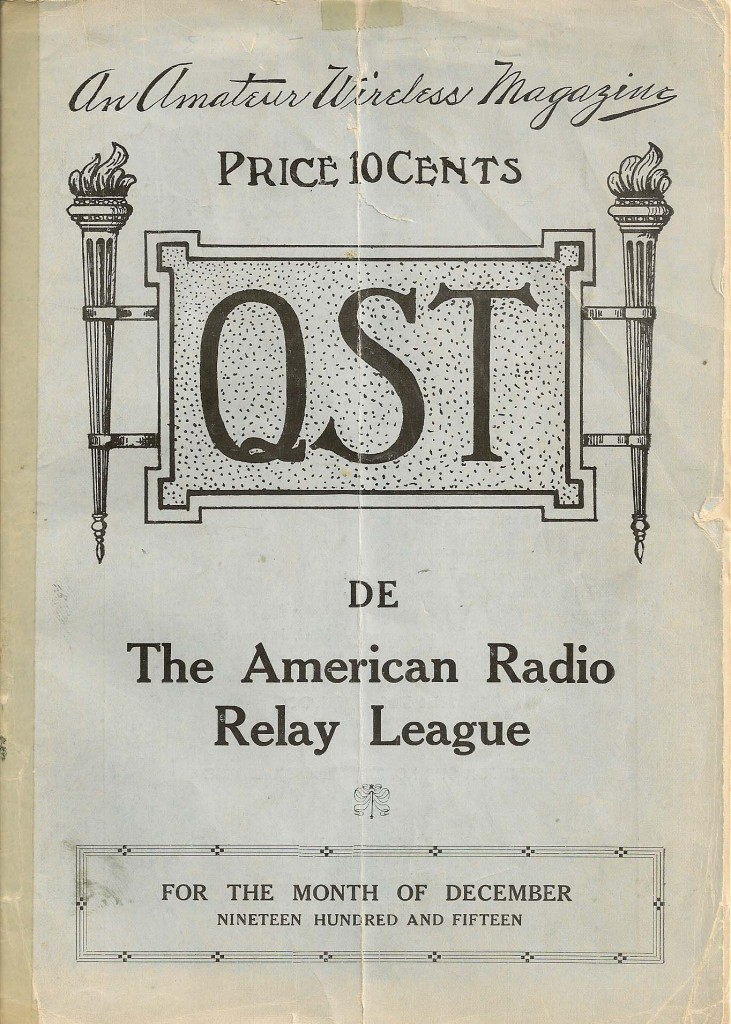 The membership had long perceived the need for a regular bulletin of some kind, but the League lacked the funds needed to jump-start it. So, as before, the 46-year-old inventor and businessman Maxim teamed up with 19-year-old Trinity College student Tuska to publish the first few issues themselves. They had already funded the initial printing of the list of stations and other materials.

Sometime in early December 1915, the first issue of a new “Amateur Wireless Magazine” went from the printer to the post office and on across the country to more than 600 members of the not quite two-year-old American Radio Relay League. Its simple cover, a combination of hand-drawn graphics and typeset text, framed its name, QST, in a large banner flanked by two torches—symbols of enlightenment and truth—an implied meaning of its name as a broadcast to amateurs. This number, as magazine issues were then called, carried no volume designator. Who knew how many would follow or for how long? For the 10¢ cover price you got 28 pages of amateur radio including a little over seven pages of advertisements.

Due to slow sales of the List of Stations book, and after consulting with members, Maxim and Tuska decided to “risk a few more dollars” to produce three months’ worth QST after which, they hoped, it would become self-sustaining based in part on members buying subscriptions and the other offerings. “If they do, we are all right, and we have a fine future promised us. If they do not, then the president and Secretary will have lost their money and wasted a lot of hard work,” wrote Maxim.1

On the first page following the contents, this announcement appeared:

Q S T is published by and at the expense of Hiram Percy Maxim and Clarence D. Tuska. Its object is to help maintain the organization of the American Radio Relay League and to keep the Amateur Wireless Operators of the country in constant touch with each other. Every Amateur will help himself and help his fellows by sending in 25 cents for a three months’ trial subscription.

THE PUBLISHERS OF QST

Evidently at least a little money was coming in already since there were ads in the premiere issue. The first one to appear, just inside the front cover, was for J. H. Bunnell and Company, Inc., of New York, where young Irving Vermilya had gone to purchase wire years before. The ad was for “two new specialties”: a straight key for $7.50 (about $170 in 2012) and a detector holder for $1.50. The ad referred to the straight key as a “transmitter.”

The first classified ads section, called “Second Hand Apparatus,” appeared in issue number two and offered to print ads for free “up to a reasonable number of words.” It listed items such as Audions, transformers, condensers and coils. Also appearing in that first listing was a “‘Martin’ vibroplex key” for $5.00—a price one-third lower than Bunnell’s straight key.