Vacuum tubes revolutionized radio, changing it more than any other single invention. When first introduced, however, even the scientists and engineers working with them did not fully understand how they worked. One of the first tubes to appear in QST was the Audion, by DeForest. Although it had been introduced back in 1905, it was expensive and amateurs did not begin to use it until seven years later, when 22-year-old Edwin Armstrong demonstrated its practical use as a regenerative detector.

In the very first issue of QST, tucked in the back on page 22, a teaser stated that the next issue would be “a wonder,” containing, among other things, information on the newest technology, the Audion detector. So in January 1916, Tuska published the lead article, “The Oscillating Audion,” about using a vacuum tube as a detector.1 For “the technical” of the “valve,” he referred the reader to Armstrong’s writings where the principles of regenerative reception were presented in full.

The idea, he explained, was to combine an incoming signal with the signal of oscillation in the tube, producing an audible beat note.2 Lacking a fundamental understanding of why it did what it did, he took an experimenter’s approach and advised operators to play around with the adjustments until they found the right settings to receive signals. He reported that signals from professional stations over 5,000 miles away had been received by an east coast ham using the Audion.

As hams began to experiment with the Audion, the QST editor asked for anyone experienced with it to send in details for publication. The March editorial claimed that 90% of amateurs did not know how to use it properly.3 As an expensive luxury, hams could not afford to be burning them out, as was the tendency. It was widely known, however, that the most effective stations were using Audion detectors. Some hams were even using them to receive continuous wave signals, considered a potentially important development in radio should it be shown to be practical, despite the DeForest company disapproving the use of the Audion this way.

Perhaps answering this call for help, the lead article in the same issue (March Radio Bulletin) was, “Practical Pointers on the Audion,” written by A. B. Cole, electrical engineer and Sales Manager at the DeForest Radio Tel. and Tel. Co. It was the first authoritative paper about vacuum tube technology to appear in the magazine.4 Filling four full pages, complete with a picture of the author, the article was the longest yet to be published in QST.

Cole devoted four paragraphs to establishing his credibility as an authority, while yet a true member of the amateur radio community. His opening sentence stated that his purpose in writing was “not to sell Audions but to assist those who use the justly famous Audion to obtain the best results.” Maybe he thought it necessary to write this because his sales title was in the by-line, but he probably also intended to attract more buyers despite this disclaimer.

He professed to want to set the record straight, asserting that much had been written in error about the Audion “without authority of the patentees.” Although he had been working professionally in the field, he considered himself an amateur radio pioneer, having been active since 1904, experienced with the Audion since 1908, and was firmly an amateur “at heart” (whereas, he claimed, many commercial radio types were known to “look down” on amateurs). He also admitted that despite extensive experience with Audions, he did not “know it all,” unlike many less experienced authors, in his estimation, who nevertheless seemed able to write whole books on the subject.

No two Audion “bulbs” were exactly alike, he explained (implying a lack of control in the manufacturing process), and therefore it required careful circuit design and especially careful layout to get good results from them. According to Cole this was one reason the company did not sell them separately from the complete detector. (It’s fair to assume that they also made more money on the detector than on the Audion alone.)  Moreover, removing the Audion from the detector, as many apparently did for experimentation, caused the guarantee to be “immediately dissolved.” He cited an example of an amateur who had installed one in his own cabinet, could not get it to work after substituting parts, blamed it on the Audion, and sent it back. The company discovered it to be in perfect working order when used in the proper detector.

There were two grades of Audion: S and X. S was the regular grade, having passed a test of sensitivity to weak signals when compared with a standard, the most sensitive crystal detector available. X grade bulbs were ones that exhibited significantly higher sensitivity than the standard. Between one and ten percent of a production run might be designated X grade. Cole claimed that this method of testing using a practical receiving situation was more meaningful than “theoretical” testing, which he oddly defined as inferring performance solely by measuring terminal characteristics. He also stated that the DeForest company’s chosen testing apparatus consisted of standard amateur equipment so as to not bias the results by using equipment specially designed for the Audion. This appears to contradict his previous statement about the need for great care in designing such circuits, but it may be that he simply meant standard, properly designed, amateur equipment.

The four most common troubles with Audions all stemmed from wiring batteries improperly or using batteries that were too depleted, wrote Mr. Cole.5 The fifth had to do with lack of sensitivity at long wavelengths (above 1500 meters), which was attributed to inefficiencies in the typical tuner, not the Audion itself (of course).

The batteries were designated as A (the grid supply), B (the plate, or wing, supply, and is the reason why B+ is commonly used to mean plate voltage), and the lighting battery for the filament. It was sometimes necessary to reverse the polarity on the lighting battery to get the circuit to work, though no reason was given in the article. Perhaps no cause was known to Cole or the company.

A tuner was properly operated by adjusting the voltages for maximum weak signal sensitivity while listening. The objective was to first obtain some zero-signal background sound (hiss), then back off on the filament to extend the Audion’s life while leaving it set at a critical point of maximum sensitivity.

Some fallacies needed correcting, he wrote. You cannot use a detector bulb to build an amplifier—they are entirely different functions. You cannot operate detectors in excess of their ratings in order to get more gain (as an amplifier) or for other purposes; you’ll just burn them out faster. Thus, after establishing his credentials as a true amateur, he proceeded to discourage experimenting—the very essence of amateur radio—at least as far as the Audion was concerned. 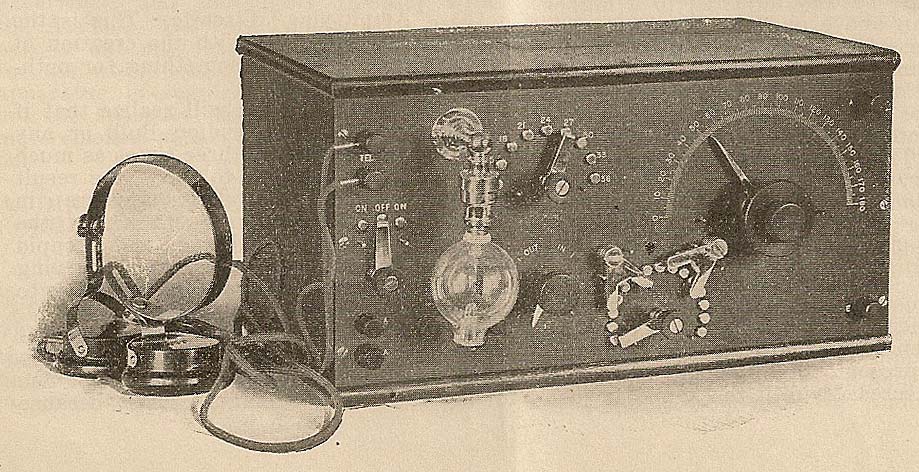 The article included a picture of a DeForest RJ6 Receiving Set. It had four controls, and the Audion bulb was mounted on the front panel on the outside of the cabinet. As the center of attention (after all, it was the single active element) this mounting scheme permitted the operator to watch it glow and adjust the filament visually.

Later in the same issue, a half-page ad from The Wireless Mfg. Co., DeForest’s company, appeared for the first time. Big, bold letters announced “A New Receiving Set,” a complete receiver based on the Audion. It claimed to be the lowest priced high quality set ever offered for sale. A full page ad by DeForest Radio Telephone and Telegraph Co. of NYC also appears in the same issue. Their RJ8 model sold for $25 and the RJ9 for $14,6 both without a B battery (batteries not included!). The main improvement was the replacement of the high voltage step-switch selector with a potentiometer, an improvement called for in the previous month’s article.

Two months later, Cole wrote a short follow-up article, “An Audion Hint,” in which he described how to make a high value resistor with paper, pencil line and rubber block, to serve as a high-resistance leak between plate and grid to prevent temporary “paralyzing” of the Audion due to static discharge at the antenna.

Picking up where Cole and Tuska had left off, Paul Godley of the R.C.A. wrote the first in-depth article about circuit design with the Audion,being one of the first to explore its use on short wavelengths.7 Filling nearly eight pages, Godley methodically presented receiving circuits of increasing complexity, ranging from the one-tube simple regenerative detector up to a four-tube receiver that employed three steps of audio amplification and interstage transformers—ignoring with gusto Cole’s admonition against using the Audion for anything other than detection.

Godley would later play an important role in the development of the short waves and equipment for using them.