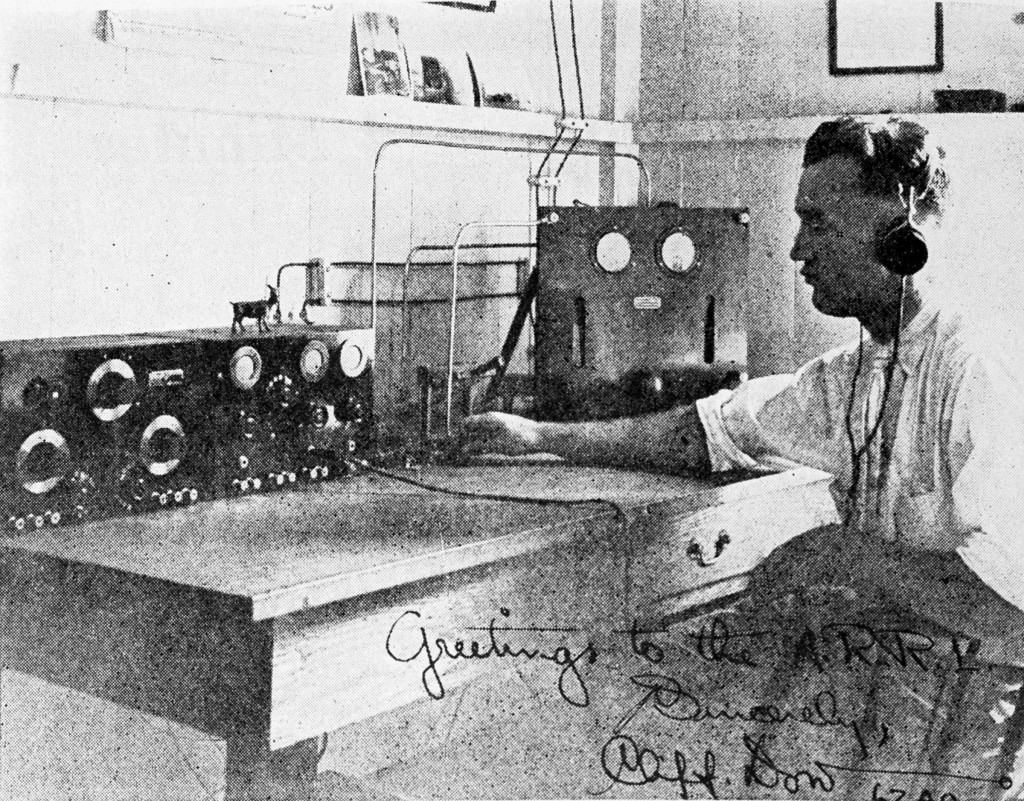 Steadily increasing use of CW paralleled exploration of ever shorter wavelengths, and the two pursuits complemented each other. Amateurs were setting new records at a whirlwind pace.

CW use in traffic handling had grown tremendously in the past year, and in June 1922 ARRL message traffic on CW exceeded that on spark for the first time.1 By the following February CW traffic accounted for nearly 90% of the total.2 Hams across the country found CW especially effective in summer when it pierced through QRN better than spark. In California, the Seefred brothers switched to CW, their 5-watt station easily outperforming their high-power spark for their active message relay work. And in New England, Vermilya reported that he was setting up a two-day-per-week (unidirectional) relay schedule with British 2KW, his relaying partner during the transatlantic tests.3

The first round-trip relay between the East Coast and the Territory of Hawaii was accomplished with only one intermediary.4 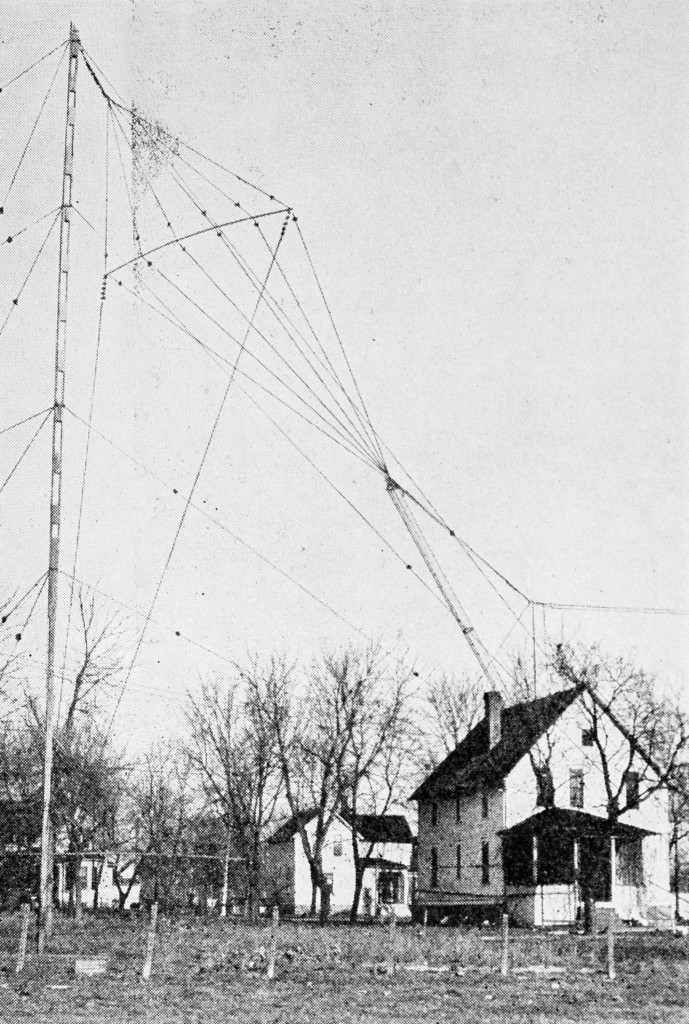 It started in October with ARRL Traffic Manager Fred Schnell on the air at 1AW trying to set a new record for the number of messages handled in a single month. He had been making good progress on spark until Maxim’s high speed rotary gap broke down. Not wanting to give up the record attempt, he and Maxim quickly assembled a CW transmitter using four 5-watt tubes and a rectified AC power supply.

Since the spark transmitter was in the basement and the CW transmitter could not be operated remotely, they had to extend the single conductor antenna lead into the operating room. Doing so de-tuned Maxim’s big fan antenna making it impossible to tune it down to 200 meters. So they lowered the fan and hoisted a single-wire vertical up the eighty-foot mast and continued.  Schnell was able to handle 743 messages that month with the makeshift setup, setting a new record (which was almost immediately outdone by 3ZO with 928, also on CW).

Having successfully met his goal Schnell continued to operate and happened to work Lloyd Berkner, 9AWM, in Sleepy Eye, Minnesota in the early morning hours of 21 November. Berkner told Schnell that he had been in regular direct contact with Clifford Dow, 6ZAC, in Wailuku, manager of the two-person Hawaiian Division of the ARRL (6TQ in Honolulu being the other member). Seeing an opportunity to set yet another record, they quickly arranged a sked for the following night to try a message relay.

Conditions seemed promising. 9AWM made contact with 6ZAC and then called 1AW around 4:30 a.m. EST. Schnell, standing radio watch, heard the call and immediately woke Maxim, who rushed downstairs to the operating room to man the station himself for the relay attempt. At 4:58, he sent the first message:

Clear and cold here tonight how with you?

Maxim and Schnell waited anxiously as they listened to 9AWM retransmit their message. At 5:04, 9AWM called 1AW with the reply from five thousand miles away:

What time is it there?

To which the reply was:

The relayed messages conveyed weather and time, quintessential radio topics dating back to the first broadcasts from Arlington. Their exchange took four minutes and eighteen seconds round trip from Hartford, Connecticut to Wailuku, Hawaii—a new record. Even more impressive was the fact that none of them was running particularly high power: 250 watts at 9AWM, 50 at 6ZAC, and only 20 at 1AW.  CW was the key.

In February 1923 a West Coast amateur aboard a ship bound for the China coast reported being able to copy US stations along the entire trip.5 This meant that signals from American amateurs had now been heard in all continents or nearby waters (beyond North America)—Europe, South America, Australia and Asia. Californians 6ZZ and 6KA held the distinction of being the only two American stations that had been heard in both Europe and Asia.

By spring, with the sunspot minimum over and solar cycle 16 just beginning, more records were being shattered at 200 meters, including the first transpacific tests in May.6 They were organized by the Long Beach Radio Club, The Radio Journal, a collection of Southwestern US amateurs, and the Wireless Institute of Australia. Set up similarly to the transatlantics, it included both assigned transmitting periods for stations sending code groups and free-for-all sessions during which anyone could participate.

At 10:00 p.m. on 1 May, “the ether was torn wide open by scores of brand new ‘ether busters,’ each eager to be first across,” wrote QST Technical Editor Robert S. Kruse. “Unfortunately an error had been made—10:00 p.m. P.S.T. is FOUR p.m. in Australia and 7,000 miles in daylight is asking quite a bit for even an American amateur station. On the 15th the schedules were changed, running tests from 1 to 4 a.m. which was 7 to 10 p.m. in Australia.” Everyone was in sync for the second try.

Vernice Bitz, 6JD, in Los Angeles, who had made a name for himself during the transcontinental relays, was the first station to be received—and not just his call sign. He managed to get a seventeen-word message to Australia along with three others to New Zealand. Messages from five other US stations were copied as well.

As excitement built among hams in Australia and New Zealand, listening for North American stations became a nightly routine, referring to the sport as “Yank Logging.” In New Zealand hams were putting their energy into advancing the radio art despite a restrictive regulatory environment, and were making contact with their nearby colleagues in Australia. They were only permitted to transmit with fifty watts on 180 meters maximum wavelength. The government charged a license fee, even for receiving, and its regulations prescribed “a penalty of ten pounds or imprisonment for three months for using a ‘single circuit tuner’ or any other arrangement that unduly energizes the antenna.” 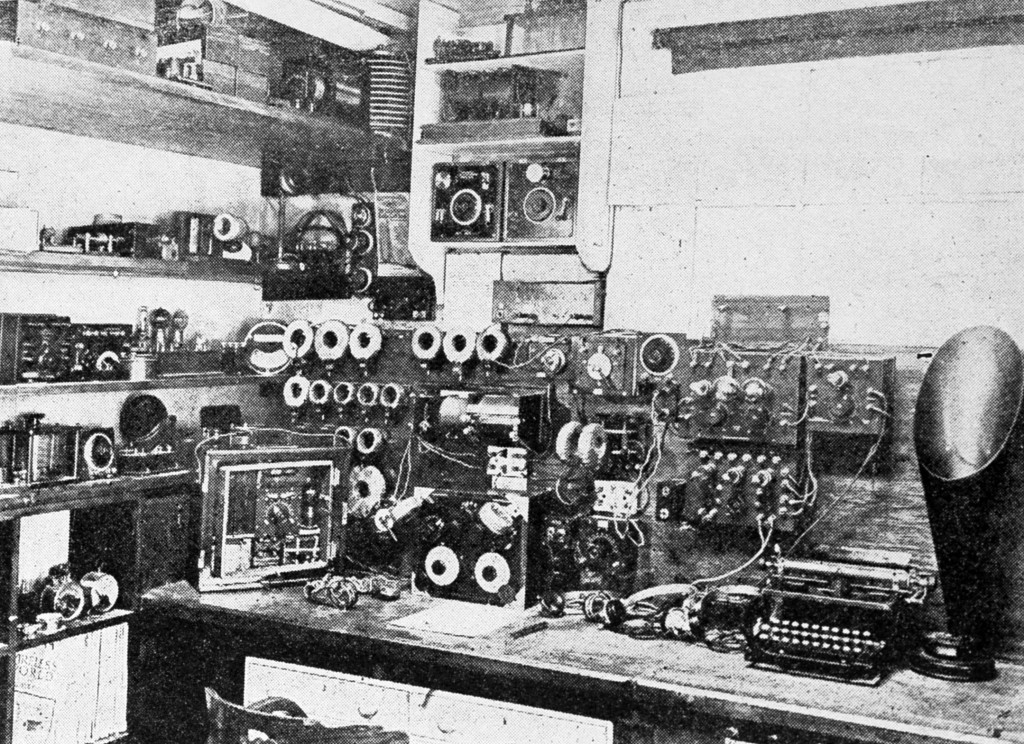 Nevertheless, the New Zealand Wireless and Broadcasting News reported that Yank Logging in late afternoons and evenings was widely popular. One prominent amateur, F. D. Bell, who had been receiving stations for quite some time, reported being “inundated with letters from the States” requesting signal reports. “Since altering my tuner to go down to 200 meters, during ten evenings listening I have logged a total of 39 U.S. amateurs, situated in every district except the second. On the evening of Easter Sunday the QRM among the Yanks on 200 meters was simply astonishing. The problem was not so much to hear them as to separate them.”

Record breaking work continued well into summer, normally a period of inactivity in the old spark days. Over a hundred American amateurs in all districts were heard that summer in New Zealand, over eight thousand miles away.7 And 5IM was reportedly heard in Ceylon, a distance of ten thousand miles! It was only a matter of time before amateurs would reach half way around the world, and ARRL Secretary Warner wondered where it would all lead.

He explained how signal enhancement occurs at an antipode—the point on the Earth diametrically opposite a transmitter’s location—a commonly held belief at the time. It was understood that as signals spread out uniformly in all directions from the transmitter and, “their energy becomes spent and they weaken because of the large volume of ether they are putting into vibration,” he wrote. But half-way around the world they should re-converge, leading to possible enhancement of signal strength. There were some problems with testing this theory, however. The favorable season in the northern hemisphere, winter, happens to be the worst one in the south, summer. It was also difficult to find a signal path entirely in darkness, even one existing for only a short time.

The complete analysis of the fading (QSS) test8 was finally released in late summer 1923,9 two years after its completion. One of the largest operations the League had ever organized, it had taken that long to get the final report together. The test was not entirely successful in meeting its goals, since the cause of signal fading was still unknown. But many interesting observations were made about the behavior of the shortwaves which helped amateurs better understand their propagation.

Several effects were known to be happening: QSS was more pronounced at shorter wavelengths, inconsequential at 400 meters, rising with decreased wavelength, but decreasing again below about 150 meters. It was never present within the daylight range of a transmitter; it was most noticeable at longer range and, therefore, at night. Everyone hoped that the tests would lead to some understanding of the causes of fading and point to a “cure” for it. The report expressed regret that the test had to be conducted using spark, but higher power tubes were not yet available when it ran.10

Although the report writers believed that many variables affected the behavior of fading, of the ten they cited, six had to do with the weather, one with static, and only three had anything to do with other atmospherics: the presence of aurora, and atmospheric conductivity and voltage gradient. Realistically, the design of the experiment was limited by what was measurable in 1921—and that did not yet include things such as solar wind or the characteristics of the upper atmosphere.

A total of 5,684 handwritten observation cards were sent in by the receiving station operators.  These were transcribed to punch cards so that the Bureau of Standards could use their card sorting machine to arrange them in various interesting ways. Still concentrating mostly on weather conditions, the analysts showed that, although the barometric pressure at the transmitting station did not affect fading, it was significantly worse when the propagation path was along a barometric gradient, either up or down, and signals were marginally stronger when traveling along isobars, or isotherms. Clouds were shown to have little or no effect on fading or signal strength. They were, however, shown to correlate with stronger strays—something considered common knowledge today. No conclusions could be drawn from the tests involving pairs of nearby transmitting stations, either on different or similar wavelengths. And there were no observations of any geographic directionality to fading effects.

The analysis team proposed a theory that centered on the atmospheric layers through which radio waves propagated. Working from the ground upwards, there is the Earth’s surface which is poorly conducting, the troposphere where weather happens, a suspected radioactive layer that was not well defined or substantiated by evidence, the stratosphere which is ionized only in daylight, and the Heaviside surface, about 100 km high, above which is a region that is always ionized and “perfectly conducting.” Waves could not penetrate this highest layer and would therefore merely “slide along it” as they were thought to do at the Earth’s surface. The difference was that waves sliding along the earth are absorbed more readily than those sliding along the Heaviside layer. This, it was said, accounted for the longer distances possible at night, since the intervening ionized stratosphere blocked waves from reaching the Heaviside layer during the day. Variations in the Heaviside surface and intervening layers is what most likely accounted for fading phenomena. The size of these irregularities in the layer might account for the fact that there is a range of wavelengths within which fading is more pronounced. The existence of zones where signal strength reaches a minimum before increasing again was explained by the waves being absorbed first as they move out from the transmitter, then at larger distances increase again as they are propagated along the Heaviside layer (which did not really explain why one needed to get far away to get the benefit).

A variation on this theory proposed that self-interference effects were the main cause of fading.  Signals propagating along differing paths due to reflection from objects including atmospheric layers, clouds, fog banks, and other things, could interfere with each other, either enhancing their strength or cancelling each other out. It was a small step towards identifying the actual cause of signal fading.  A more complete understanding would have to wait a few more years until amateurs explored much shorter wavelengths.

It was clear, however, that fading was no freak.