The unit arrived via UPS around 11:30 a.m., 3 April 2017, my having pre-ordered it through GigaParts on 11 November 2016, shortly after it was announced. It was very well packed – double boxed. Good thing since the outer one had some minor punch-throughs and other bruises. 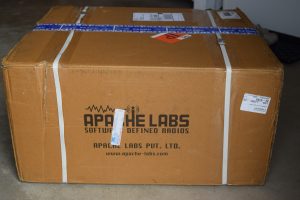 The outer box is separated from the inner box with an approximately one-inch thick layer of foam sheets. Inside the inner box, the unit was surrounded by thick thicker foam sheets – perhaps 3 or 4 inches, all taped together with packing tape. Only the unit itself, a couple of plugs for microphone and headphones, and a power cord were in the box (no manual). 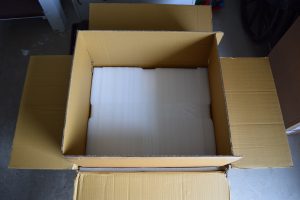 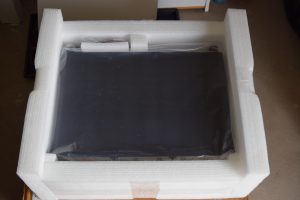 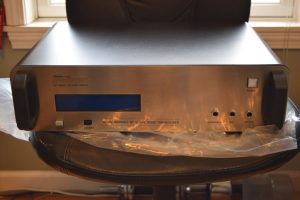 The first glitch I ran into is that the power pole connector does not match the left/right orientation of the power supply cable I had bought for use with my Jetstream JTPS-45 power supply. The Apache-supplied cable has the power pole connector as red-black, L-R, whereas mine is black-red. So I’m having to use it with the polarity wrong, but hooked up correctly to the Jetstream PS – namely black to positive and red to negative. Using the Apache cable will require getting some screw-lug terminals to install on the ends, which come shipped simply with tinned bare stranded wire ends. But then I learned from John, W1JA, that these pre-installed power pole connectors sometimes slide apart. It turned out the cable from Apache seems like they have been glued together, something power pole recommends for a conductor pair. But the one I bought with lugs on the other end slid apart easily and I was able to reverse their order to plug into the 8000 in the right configuration (i.e. red as positive). I still would like to use the Apache cable because it’s nicer than the one I bought and has an in-line fuse, which mine doesn’t.

The second very minor glitch is that the cabinet is secured with allen (hex key) screws that are apparently metric sized, since my 1/8″ wrench is too big and the 7/64 is too small. I’ll have to get a set before I open it up. I could use a pair of pliers since the allen head screws have knurled heads that stick out from the cabinet, but I won’t do that for fear of scratching them.

There are no noticeable scratches on the unit. The only physical nit is that the top cabinet section isn’t seated down all the way into the bottom on the right side, so it sticks up just slightly above the front panel. Somebody at Apache Labs missed that in inspection. If I loosen the screws on the sides I should be able to push it down properly since the screw holes are oblong, apparently to allow for some play in the positioning of the cabinet halves. The top comes down over a lip in the bottom, reminiscent of the Drake 4-line cabinets.

I connected the newly oriented power connector to the power supply, cat-6 ethernet cable to the PC, key, headphone and microphone connectors wired into the Radio-2 port on the multi-switcher, and the antenna cable running to port 2 of my main antenna switch, which is wired to select between various rigs. Radio 2 used to be my Drake TR-4, which has been temporarily put into hibernation.

Time to review the draft manual I downloaded a couple of days ago – apparently the only documentation available at the moment. It’s full of information but needs some serious editing. It seems as though some sections are incomplete, too.

I downloaded and installed OpenHPSDR-PowerSDR mRX PS version 3.3.15 from GitHub. Copied my own versions of the installation I’ve been using for my modified source code as per the forum:

Turned on my Jetstream JTPS45 switching power supply and adjusted its output to just a hair above 12V according to its front panel meter. Moment of truth: I pushed the Power button on the 8000. It performed self-test in a couple of seconds and sent “OK” in CW through some internal beeper. 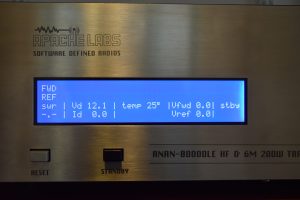 I brought up OpenHPSDR-PowerSDR mRX (hereafter called “Px”), and chose ANAN-8000DLE and “Alex” according to the instructions. When I clicked the Power button, it connected instantly to the radio! Setup reported the following connection information: IP address, MAC address (I like that my initials are the final two characters ;-), Ver 1.4, ID: OrionMKII.

At this point I’m hearing static on my headphones thru the Multi-Switcher and seeing it on the Px panadapter. Apparently I wired the headphone plug correctly. Connecting the antenna, I hear many signals on 40m, so everything seems to be working – it’s a receiver!.

Now on to transmit. I tried transmitting using the Tune button – nothing. Tried CW – nothing. Tried changing various settings – no luck, zero output. Then I tried pushing the front panel STANDBY button, which disables the PA and makes the A8K receive-only. Aha! It had been pushed in. And when it’s pushed in, it might not look pushed in. The difference between in and out is slight. I had simply looked over to see what I thought was the button in its off (out) position but it wasn’t. The display indicates “stby” or “OPER”, however, and it clearly said “stby” – I should have noticed that too. Now all is well and it’s putting out power up to 200W. It seems like it would go higher if I pushed it. But full power on the “Drive” control indicates 161W on the Px wattmeter, so some calibration is in order.

I performed the first output calibration on 40m. I set the Drive control to 50, and in setup adjusted PA Gain for 40m to 100W out on my classic Drake W-4 wattmeter. Increasing to 100 on the Drive slider caused an output just a tad over 200W. So I backed off just a tenth (i.e. increased the gain number) to 48.5. I used this as the starting value for the rest of the bands and adjusted them all similarly.

Oddly, when switching bands to do the drive calibration, I noticed that for 30m, then for 160m, 17, 15, 12, and 10m, I heard very much less noise on receive – way too quiet – upon first selecting the band. I discovered that by tuning up/down a single 100kHz step, a filter selection relay clicked and everything became lively again. The behavior didn’t recur after that. Evidently Px might start out in a weird state under certain conditions resulting in the wrong filter being selected the first time you choose a band from the band selector buttons. It hasn’t recurred, so I conclude it’s some initial condition. When it does occur, repeatedly hitting the band button so as to cycle through the band stack, you get back normal noise until you circle back to where you began, at which point the filter is back again (until you perform the tuning as above). This reinforces my conclusion that it’s an initial state problem in some variable in the Px code.

I finished calibrating all the bands using the 100w point as 50 on the Drive slider. My dummy load apparently doesn’t present 50-ohms on 6m, so I performed that calibration at the 20w level (10 on the slider), which didn’t trip the SWR protection.

Next, I ran up against a couple of problems when setting up for CW and phone operation, and both pertain to using the NCS-3240 Multi-Switcher. First, CW. When I ordered the Multi-Switcher, I ordered the option for grid-block keying on radios 2, 3, and 4, intending all three for keying classic rigs, with Radio1 reserved for my FT-1000D. So I’m going to have to remove that from the Radio2 port for it to key the A8K. For now, I’m limited to keying it directly with my paddle, bug, or straight key, which work fine.

The other thing I had to change was the mic connection for phone. I had wired the cable to the low impedance output of the NCS box for use with the Drake TR-4. So I just needed to unsolder a wire from the DIN connector and move it to a different pin to get hi-Z output. I didn’t realize this until I tried to actually use a microphone through the Multi-Switcher to modulate the A8K.

Ready for a QSO! First QSO was with W1JA on Saturday morning, 8 April 2017, soon joined by K4SO and WU2O. They helped with various tweaking, including getting the transmitted audio set to sound decent. Thanks, guys!

Tested out PureSignal – seems to be operating fine and is as amazing as I expected.

Next on the to-do list is to get it working with my Alpha 89 amplifier using XDC-1 coupler/sampler.